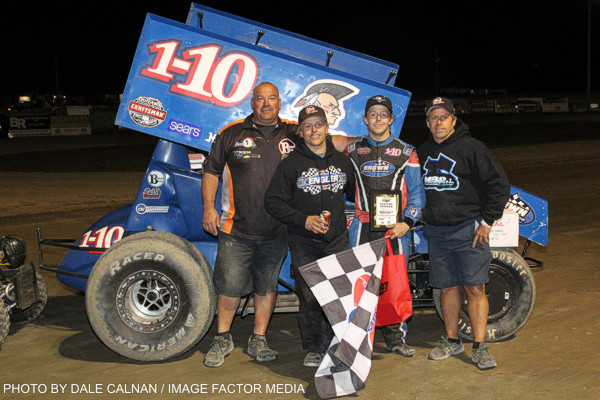 With strong finishes to their racing programs at Ohsweken Speedway on Friday night, Mitch and Jake Brown headed to Brighton Speedway for the Annual Labour Day Classic Weekend which featured two nights of competition for the Southern Ontario Sprints – a trip that proved to be the highlight of a successful three-day weekend for the Brantford siblings.

In the Saturday opener of the two night Brighton Speedway show it was younger brother Jake outdueling Caistor Centre’s Cory Turner for the win in a race that provided race fans with plenty of nose to tail, side by side open-wheel racing excitement.

The two front runners led the 20-car field to the green flag with Turner powering to the lead on the opening lap but Brown got the upper hand on lap two through 11. Turner recaptured the lead spot on lap 12 but on lap 18 Brown powered his Auto Refinishers Canada/Hill’s Tires &Gas/ Strodes BBQ #1-10 back to the front and was never headed through the final seven laps to cash in on his first career SOS victory.

Turner held on for second with Mitch Brown securing third.

In the Sunday race both Brown brothers were on the front row for the A-Main with Mitch grabbing the lead in corner two of the 1/3rd-mile oval and holding that position throughout the 25-lap chase.

By the mid-point of the race Cory Turner and current SOS points leader Dylan Westbrook were making their presence felt as they moved into the top five but after overtaking Jake Brown for second and third respectively on the final lap they had little left for the Burger Barn/ Ace 1/Aitken Motors/ Brown Auto Service racing veteran who cruised to his first SOS win of the season.

Mitch Brown’s efforts to improve his position in the Kool Kidz/Corr Pak Merchandizing 360 Sprint Car standings got off to a disappointing start on Friday night when the fibreglass hood on his Sprinter came loose during his qualifying heat forcing the 2016 track champion to the pits at the mid-point of the eight-lap chase.

Going into the final points night of the season he was alone in fourth place in the standings trailing leader Jim Huppunen of Welland, ON by 44 points and was 40 back of Dylan Westbrook of Scotland, ON and just 2 behind Cory Turner of Caistor Centre, ON.

But after starting seventeenth in the 18-car field, the  third generation competitor began a determined  drive that saw him use the lower line around the 3/8th-mile oval to move into the top-ten by the half-way lap of the 25-lap feature. After dispensing with some of the those who had started higher in the lineup Mitch began a steady assault to catch the leaders by passing Huppunen and Turner to move into third spot but couldn’t run down race leader Westbrook and Cowlesville, NY’s Scott Kruetter piloting the Todd Hoddick #49.

The win propelled Westbrook past Huppunen to capture the Championship title in the Ohsweken standings.

The third-place finish for the Brantford driver secured third-place in the final points standing and was a remarkable run considering his starting spot and some of the problems he experienced at his home track this season.

Jake Brown slipped to a seventh-place finish in the closing laps after a strong run that saw him among the top-five in the early laps.  He finished seventh in the track’s final standings.