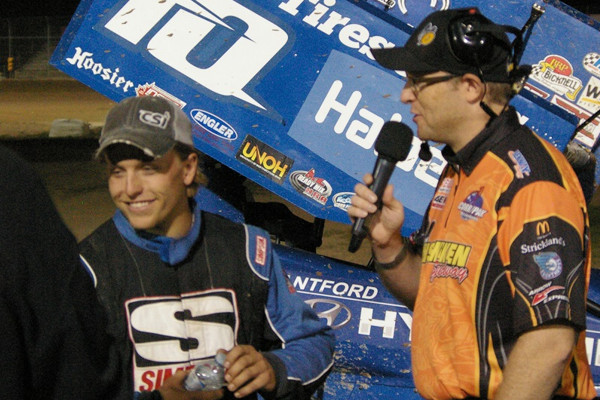 Mitch Brown’s goal of winning the 360 Sprint Car Championship at Ohsweken Speedway was finally realized on Friday night (September 2nd) with solid run that earned him a fourth-place finish in his qualifying heat and an eighth-place finish in the 25-lap A-Main.

Despite his somewhat disappointing finish in the track’s final points night feature of the season, the Brantford, ON native was nonetheless grateful that his efforts over the past seven seasons of competing in the demanding open-wheel sport has finally paid off.

Brown has been in the championship chase at the “Big O” for the past three seasons finishing third in 2013, second in 2014 and third again last season. He is also a former Mini Stock Champion at Ohsweken (2009) and captured the

Heading to Ohsweken on Friday night Mitch held a comfortable lead of 51 points over his closest rival Dylan Westbrook of Scotland, ON and 64 over Dain Naida of Tecumseh, MI with brother Jake Brown and Dave Dykstra rounding out the top-five.  All the point’s leader had to do to clinch the title was start the night’s feature race, but in racing circles that’s easier said than done.

Even before the racing action began, he and his teammates narrowly missed what could have been a devastating  incident when Glenn Styres’ throttle hung wide open tonight when he was pushed off to warm up the engine. As he attempted to return to his pit stall his car careened into a huge retaining block within two metres of where Mitch and his crew were working on his race car. The result was the wrecked #0 race car of Styres and startled #10 crew, members but thankfully that was the only damage.

As of Friday night Mitch and Jake were still undecided on whether to compete in the three remaining Southern Ontario Sprints events but are planning to compete in the 12th annual Canadian Sprint Car Nationals two-day weekend event at Ohsweken Speedway on September 16th and 17th.