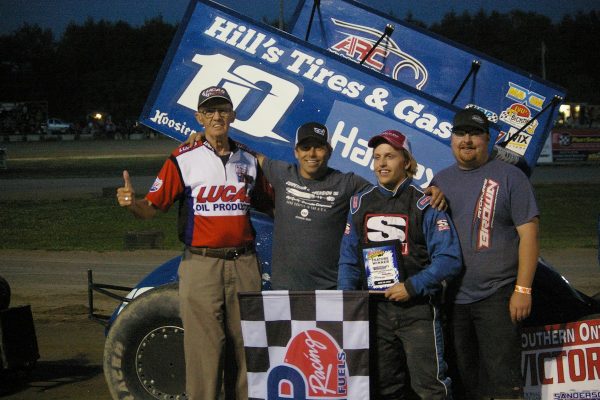 Mitch Brown romped to two impressive Sprint Car racing feature victories this past weekend winning in convincing style at Ohsweken Speedway on Friday night then hustling to the head of the pack early at Brighton Speedway on Saturday night running virtually unchallenged through the remaining laps of the Southern Ontario Sprints 25-lap A-Main.

In Saturday’s action, Brown, who started fourth, wrestled the lead from current SOS points leader Jamie Turner of Caistor Centre, ON  after the two had run nose to tail and side by side through the first half dozen laps of the 25-lap pursuit then survived three restarts to earn the win. Mitch’s victory was his second of the season at Brighton and marked his eighth feature win in SOS competition since joining the touring series three seasons ago.

In the closing laps Dain Naida of Tecumseh, MI made a valiant effort to reel in Brown following the third and final restart but just didn’t have what was needed to overcome the leader.  Jamie Turner finished third followed by Ryan Turner and Glenn Styres.

Friday’s win at Ohsweken Speedway was Brown’s second win of the young season at the 3/8th-mile oval. He started on the front row of the 20-lap A-Main,  jumped into and early lead over pole sitter Cory Turner of Caistor Centre and ran away from the rest of the 19-car starting field for what was his ninth career win at his home track.

Jake Brown’s performance  since his surprising opening night win at Ohsweken and a second place finish to his brother the following week has tapered off a bit but he has still posted some impressive top-10 finishes that have kept him in second place in the track’s standings -quite a feat for  a driver in his rookie season in the 360 Sprints division.

He finished seventh at Ohsweken on Friday and eighth at Brighton.

Both brothers will be in action this coming Friday to compete in the  Kool Kidz Corr/Pak Merchandizing weekly show  at Ohsweken Speedway.