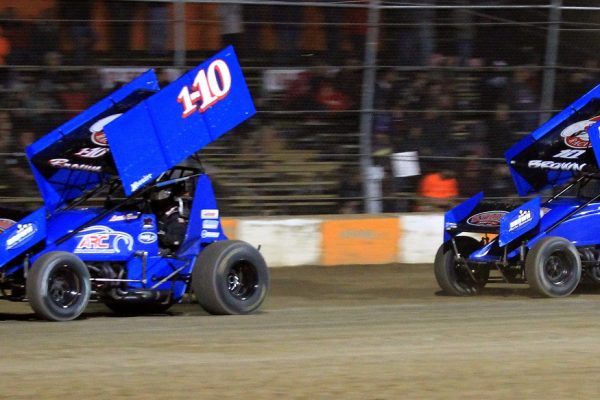 The local racing season at Ohsweken Speedway is barely underway as  teams and fans head to the track for this Friday’s night of action headlined by the Patriot Sprint Tour.

Heading into the fourth night of racing in Ohsweken’s 2016 schedule Brantford brothers Mitch and Jake Brown are at the top of the track’s Kool Kidz Corr/Pak Sprints points standing.

To followers of the sport, it comes as no surprise that the older brother Mitch is among the leaders but the biggest revelation thus far is the fact that Jake, a “rookie” in the 360 Sprint Car division, is leading the pack.

With a surprise win on opening night, a determined second place finish behind the winning performance of his brother a week later and a twelfth-place run on June 3rd, Jake remains atop the points standings by an eight point margin over his older brother.

Mitch Brown’s run in the season opener was thwarted two laps from the finish when he tangled with race leader Dylan Westbrook causing both drivers to spin and opening the door for his brother t scamper to the victory.

The following week , Mitch recorded his eighth career A-Main win at the 3/8th-mile oval then raced to a solid fifth-place finish on June 3rd that moved him into second spot in the standings.

Mitch, the 2015 Southern Ontario Sprints champion, skipped  both SOS scheduled events last weekend and elected instead to run Saturday night’s Patriot Sprint Tour race at Fulton, NY where he finished eighth after a strong bid for a top-five finish that was hampered by contact with another car.

Both brothers will be in action this Friday to compete in the  Kool Kidz Corr/Pak Sprints vs Patriot Sprints in the touring series annual appearance at Ohsweken Speedway.

Mitch is currently third in the PST’s Canadian points race following his third-place finish at Merrittville Speedway back on April 23rd. It will be Jake’s first attempted run with the PST – a challenge  he’s been looking forward to since moving up to join his brother in the 700 hp 360 Sprint Car class.