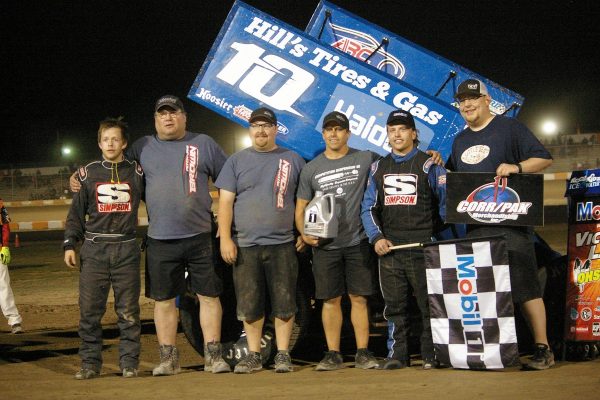 Not to outdone by his younger brother’s performance of last week, Mitch Brown netted his first win of the season at Ohsweken Speedway on Friday night (May 27th, 2016) grabbing the lead on lap seven of the 20-lap A-Main and running virtually unchallenged through the remaining laps on his way to the checkered flag.

“These cars are good, and its showing,” said Brown following his eighth career sprint car win at Ohsweken. “I have to thank my Dad; he probably doesn’t get enough credit.”

The opening lap saw Jamie Turner of Caistor Centre take the early lead over his son Ryan with Jake Brown in third but Mitch Brown quickly joined the foray from his seventh-place starting spot by moving past both the younger Turner and his brother Jake to chase down the race leader.

Jake Brown took the 2nd spot from Jamie Turner, then held off Dylan Westbrook of Scotland, ON , and Ryan Turner who rounded out the top 5 finishers.

A caution of lap 15 when Glenn Styres climbed over Derek Jonathan’s right rear wheel and rolled over in turn 2. brought out the red flag but Styres’ crew was able to get their car back on the track, albeit with some damage.

Mitch Brown was able to pull away on the restart while his competitors worked around lapped cars.

Note: The evening success of the Brown brothers came on the third anniversary marking the passing of their grandmother Gloria Brown- one of their biggest boosters.