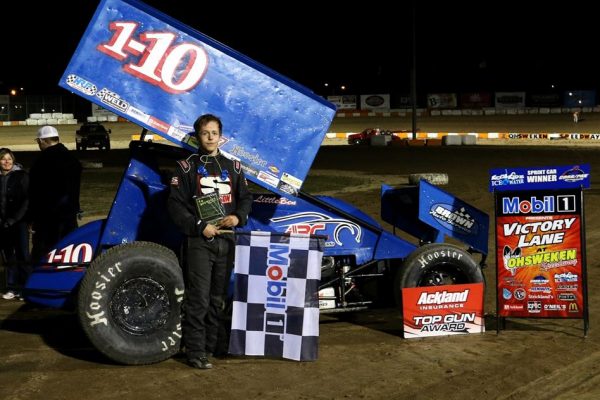 Mitch and Jake Brown have been as close as brothers can possible be while growing up in Brantford, with the older sibling Mitch enjoying most of the limelight stemming from his success in 360 Sprint Car racing.

Jake Brown followed Mitch into the oval track sport in 2010 and this year moved up to join his brother in the 360 Sprint Car ranks with the hopes of placing well in this winged open-wheel division and perhaps even winning a race or two.

Well, he certainly didn’t wait long to realize his dream by capturing his first career 360 Sprint Car win in his first career start in the feature event A-Main Friday night at Ohsweken Speedway.

“It’s an incredible feeling,” the younger Brown said following the victory. “I feel like I’ve done something very few people can say they’ve done in winning my first ever 360 start.  I know he’s watching up there,” he added in Victory Lane, referring to his late grandfather Harold Brown whose old Supermodified car number  “1-10”  and nickname “Little Ben” he carries on his race car.

Jake started fourth in the 20-lap chase, moved quickly into second passing last year’s “Rookie of the Year”  Ryan Turner and moved up to second behind pole sitter Dylan Westbrook after Justin Martin lost an engine.

Following a couple of restarts brother Mitch moved into third with defending champion Glenn Styres hot the heels of the leaders. Mitch passed his brother with three laps to go but he and leader Westbrook made contact causing  both drivers to spin on the low side of the track.

Jake narrowly missed contact with the spinning leaders, but kept the car under power to assume the point position. The yellow flag set up a green-white-checkered finish where Jake was flawless on the restart to hold off Dane Lorenc and Ryan Turner for the victory.

Mitch recovered  to finish eighth after restarting at the back of the field. 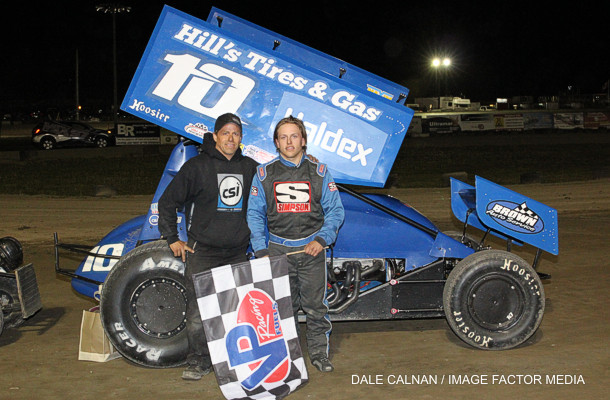 On Saturday night both drivers headed east to Brighton Speedway for the opening of the Southern Ontario Sprints  season where Mitch Brown began a successful start in defence of his series championship title by leading all 25 laps to victory on the 1/3rd-mile oval.

It was the veteran competitor’s third straight year that he has started the SOS season with a win and marked his seventh career feature win in the travelling series.

Jake Brown finished 12th in his first ever start at the Northumberland County track on the shores of Lake Ontario.

Both brothers will be back in action Friday, May 27th at Ohsweken Speedway.