STRONG RUNS FOR MITCH BROWN IN THE CAROLINAS 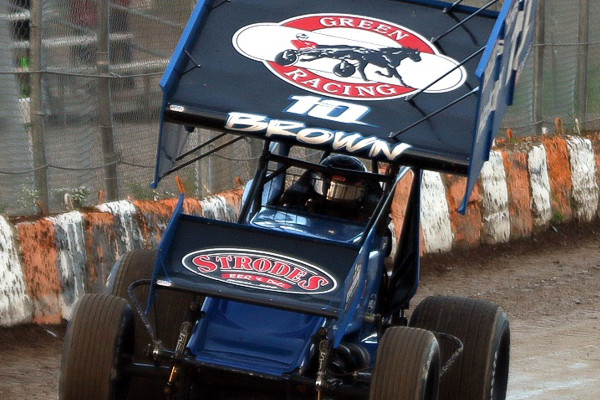 Racing to this third generation competitor means being strapped behind the wheel and being a part of the action. And while the NASCAR scene still has some interest to him, Sprint Car racing (the winged open-wheel form of car racing) is now deeply ingrained in his passion to excel in motorsports.

Mitch has already been south in mid-February to compete at East Bay Raceway Park near Tampa, Florida and had plans to return to the Sunshine State at the beginning of April to resume his limited United Sprint Car Series pre-season schedule with events at Lake City and Ocala, Florida.

But with unsettled weather forecast for the area he elected to scrub those events and headed southeast to the Charlotte area the following weekend April 8th and 9th for events at Gastonia, NC and Lancaster, SC – a move that proved to cure his need for speed.

His first event of Friday night at Carolina Speedway got off to a slow start with a last place finish in his qualifier but after starting at the back of the 18-car field in the A-Main he worked his way up to seventh-place earning the “Hard Charger” award for most cars passed (10) in the 30-lap run.

The next event across the state line at Lancaster Speedway -40 miles south of Charlotte- saw the Brantford competitor charge to the win in his first race qualifier then made a strong run in the 30-lap A-Main to chase winner Puyallup, Washington young gun Trey Starks and Marco Island, Florida’s Nick Snyder to the checkered flag.

Brown challenged Snyder for the runner-up spot over the final 15 laps of the main event, but the 2015 Southern Ontario Sprints series Champion had to settle for the K&N Filters Podium Award third place.

The next events for Mitch and his crew will be two races at Lima, Ohio for NRA Sprint Invader events on April 15th and 22nd at Limaland Speedway before the opener of the Patriot Sprint Tour’s 2016 Canadian schedule at Merrittville Speedway near St. Catharines on April 23rd.

His pre-season will continue with five more events before Ohsweken Speedway’s season opener on May 20th.

Those events will consist of two more Friday night trips to Limaland (April 29th and May 6th); then a quick early morning run from Ohio to New York state the next day for a Patriot Sprint Tour race at Canandaigua Motorsports Park on May 7th.

The following weekend of May 13th-14th he’ll be back south of the border for two NSA shows beginning with another Friday event at Limaland and then on to Indiana and Montpelier Motor Speedway where he won his first race on American soil last August 1st.

With plans to make another serious challenge for the Corr/Pak Merchandising championship at Ohsweken Speedway, his continuing involvement in the Southern Ontario Sprints, added events on the cross-border Patriot Sprint Tour and selected events in the Empire Super Sprints, Mitch Brown knows he’s got a busy summer racing schedule ahead of him and is determined to make his mark whenever his race car rolls off the hauler in 2016.