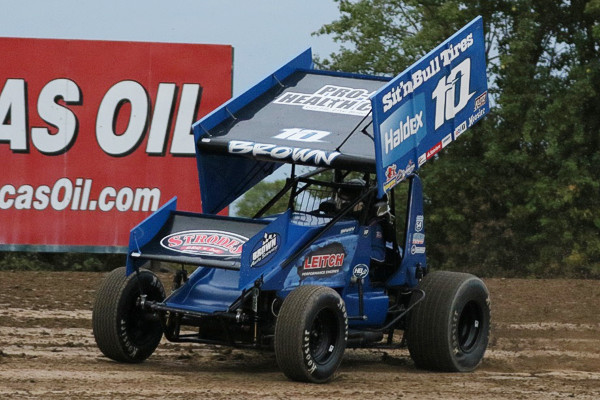 The season opener at Merrittville Speedway this coming weekend is welcome news to Brantford’s  Mitch Brown.

The third-generation Sprint Car competitor has already run a number of pre-season events south of the border in 2016 but this Saturday’s event will be his first test on home soil against some familiar competitors at a track where he  enjoyed some solid runs at in 2015.

The event is the season opener on the cross-border Patriot Sprint Tour schedule and Mitch is hoping to again be among the leaders when the dust settles on the 25-lap chase. Last season he finished third in the in the PST opener at the Thorold, Ontario area track and he’s hoping to equal or better his finishing position in this year’s return.

The 3/8th-mile Merrittville oval  is also becoming one of Mitch’s favorite venues where he not only won the final event last on the Southern Ontario Sprints’ 2015 season but also clinched his first SOS Championship title.

Race time for the Saturday event is 7:00 P.M. at the Thorold/St. Catharines, ON area race track.

Mitch Brown continued with his pre-season racing adventures south of the border on Friday April 15th with a trip to Limaland Motorsports Park (Lima, OH) where he won his qualifying heat then posted a solid third-place run in the 25-lap A-Main feature.

He started the NRA Sprint Invaders feature event on the pole but as the field was about to complete the first lap, the  cars of JR Stewart (Bellefontaine, OH), Hud Horton (Dayton, OH), and Jarrod Delong (Lima, OH) tangled in turn 4 bringing out a red flag. Phil Gressman of Helena, OH edged past Brown on the restart and as the two began their battle at the front of the field  the race was halted again when the car of Shawn Dancer (Delphos, OH) came to a stop in turn 4. Four laps later the race was red-flagged for a second time when the cars of Devon Dobie (Wapakoneta, OH) and Nick Roberts (Bloomingburg, OH) flipped violently between turns 3 and 4.

Fortunately both drivers walked away from the scene but on the restart local favorite Jared Horstman of Ottoville, OH edged past Brown for second spot and into the lead with a pass of Gressman on lap 9. Brown continued his pursuit of the leaders  but had to settle for third spot at the end of the 25-lap chase.