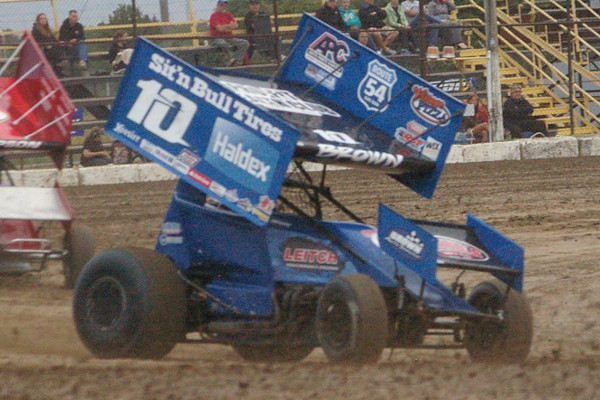 Mitch Brown knew he had the Championship title in the bag heading to Merrittville Speedway on Friday night for the final event on the 2015 Southern Ontario Sprints 12-race schedule. With a comfortable lead of 136 points over 5-time and defending champions Glenn Styres it was simply a case of entering the event to make it official.

But as has been his goal for every event he’s contested since entering Sprint Car competition in 2010, winning the race was what he was out to achieve at the 1/3rd-mile oval.

When the night was over it was  Mission Accomplished, as the sixth-year driver grabbed the lead from Styres with just two laps remaining to score his third SOS A-Main victory of the season and sixth to date in 2015.

rounded out the top-five finisher in the Friday night special.

The format for the two-day wrap-up weekend of Ohsweken 2015 season will include group time trials for the 360 Sprint Cars, plus 6 heat races, 3 B-Feature races, a dash race for heat race winners to determine the top 6 starting positions in the A-Feature, the 15 lap “Little Feature”, and the 35 lap A-Feature.

See http://ohswekenspeedway.ca for all the details.

Further details of Friday’s race and an overview of Mitch Brown’s and his brother Jake’s successful season will be issued shortly.