Mitch Brown Closes In On Top Spot at Ohsweken Speedway 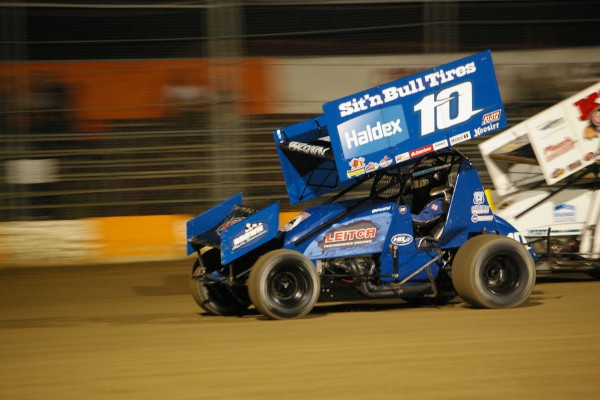 Rebounds from Brockville Miscue to a Fourth Place Finish At Cornwall

Mitch Brown continues to deliver strong runs at Ohsweken Speedway in 2015 as he closes in on points leader Todd Hoddick of Cheektowaga, NY in the Corr/Pak Sprint Car Division standings.

Brown entered Friday’s event trailing Hoddick by 12 points in the 360 Spring Car division but chopped 6 points off that lead with a solid second-place finish in the 20 -lap chase to the A-Main checkered flag.

The driver of the Haldex/Pro-Fit Health Club/Strodes BBQ & Deli/54 Gas and Variety #10 Sprinter finished a distant fifth in his Friday night qualifier and drew ninth-starting spot for the feature event.

Jim Huppunen of Welland and Ryan Turner of Caistor Centre led the field to the green flag but an early spin at the back of the field brought out the caution forcing a compete restart.

On the restart sixth-place starter Glenn Styres wasted little time getting to the front before the end of the first lap while Brown had a more difficult time moving into contention from his ninth-place starting spot. He made his move into fourth quickly but had a tougher time disposing of Alton’s Keith Dempster, point’s leader Hoddick and Caistor Centre’s Cory Turner before setting his sights on Huppunen and Styres.

Brown and Huppunen waged a torrid battle for second before the Brantford speedster gained the advantage on the low inside line. In the closing laps he was gaining noticeably on the defending divisional champion but fell short in his bid for his second big win at the 3/8th-mile oval this season.

Huppunen, Hoddick and Dempster rounded out the top-five while Cory Turner, Derek Jonathan, Chris Steele, Jamie Turner and Ryan finished in the top-ten.

The win for Styres – his fourth straight A-Main win of the season at Ohsweken and 26th career victory at the track – moved him to within 11 points of leader Hoddick and just five behind Brown in the season’s points standings.

With barely enough time to clean the mud off his Sprinter, Mitch and is crew headed east to compete in Patriot Sprint Tour races at Brockville Ontario Speedway on Saturday before wrapping up his three-day weekend at Cornwall Motor Speedway on Sunday.

On Saturday night an early lap miscue saw Brown slip off the track through turns one and two in an attempt to snare the lead but he rebounded for a ninth-place finish.

Sunday’s PST race at Cornwall Motor Speedway witnessed the Brantford youngster run away with the win in his qualifier then make a strong run in the 25-lap A-Main to finish fourth behind pole sitter Steve Poirier of St. Mathieu, QC, Lee Ladouceur of Alexandria, ON and Glenn Styres of Ohsweken ON. Brown started 6th in the 18-car field

With his weekend efforts Brown is currently third in the Patriot Sprint Tour Canadian Series behind series leader Jason Barney of Brewerton, NY and Jared Zimbardi of Bradford, PA.

Jake Brown moved ahead of Ohsweken’s Alex Hill in the Strickland’s’ GMC Crate Sprint Car Division with a sixth-place finish at Ohsweken Speedway on Friday night. He now trails Dylan Westbrook of Scotland, ON in the standings.

Both brothers will be back in action at Ohsweken Speedway this Friday Night (July 24th) for the track’s JIBS Action Sports Christmas In July + Autograph Night.