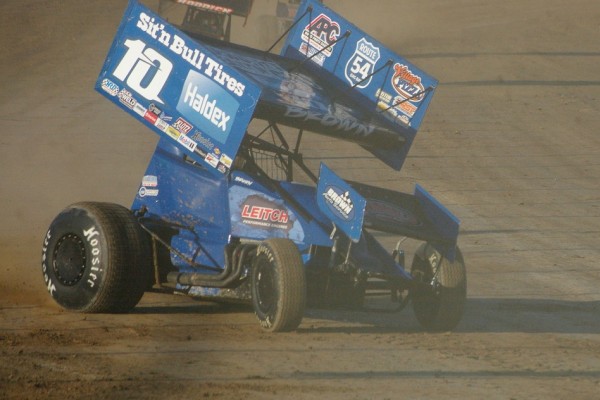 Mitch Brown added another checkered flag and a second place finish to his early season Sprint Car record this past weekend by outdistancing his competitors at Ohsweken Speedway on Friday night then hustling south of the border to two Patriot Sprint Tour events where he finished second in the A-Main at Stateline Speedway near Jamestown, NY.

Unfortunately, a strong start to his third race of the weekend at Eriez Speedway, near Erie, PA came to an abrupt end on Sunday night when he was knocked out of the A-Main on the first lap breaking his string of six straight podium finishes since the opening of his regular season schedule back on April 25th.

Brown had started the Sunday feature 3rd in the 25-lap contest but he and Jack Sodeman Jr. of North Jackson, OH made contact when eventual winner Sammy Reakes of IV of Palermo, NY made a three-wide move under both drivers entering turns three and four. Brown’s car suffered sufficient damage that finished his night resulting in a 23rd-place finish. Mitch had earlier finished a strong second in his qualifier.

In Friday’s weekly show at Ohsweken, the sixth year Sprint Car competitor jumped into the lead on lap 4 of the 20-lap A-Main then battled to keep 2014 track Champion Glenn Styres at bay until the engine in Styres’ sprinter expired on lap 18. Outside pole sitter Dain Naida of Tecumseh, MI finished second with Cheektowaga, NY’s Todd Hoddick,
Jim Huppunen of Welland, ON and Keith Dempster of Alton ON rounding out the top-5.

Best Finish Ever In Patriot Sprint Tour Action
On Saturday night, Brown celebrated his best ever finish on the Patriot Sprint Tour chasing Sammy Reakes IV of Palermo, NY to the checkered flag at Stateline Speedway after starting ninth in the 25-lap chase. With one lap remaining following a restart, Mitch Brown had moved up to second but despite using an aggressive line was unable to punch his ticket for the win.

The Brantford, ON driver also took the 4-lap dash for cash at the 1/3-mile speedway.

Jake Brown finished sixth in the Crate Sprint Car action on Friday night at Ohsweken after a fifth-place run in his qualifier.