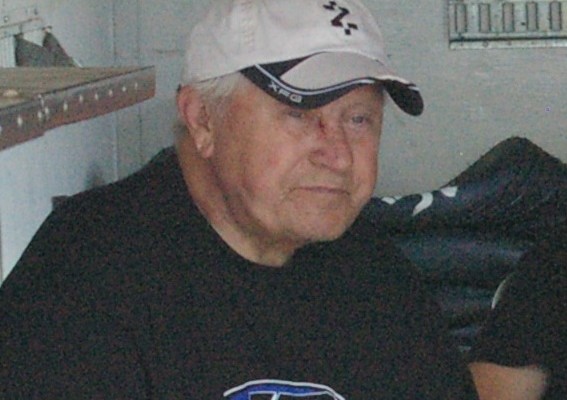 Mitch Brown, his brother Jake, Doug Brown and his sister Sue along with the entire Brown racing family today mourn the loss of their grandfather, father and friend Harold Brown who passed away Sunday, July 13 after a lengthy illness.

Harold was a long-time Brantford businessman and noted stock car racing competitor who competed in  motorsports from the early 1960s through the mid-1980s.

During his early racing career he was known as “Little Ben” running Supermodifieds under the popular number 1-10 at such tracks as Bridgeport Speedway (Kitchener), Toronto’s CNE, Nilestown and Delaware speedways in the London area, Flamboro Speedway(Hamilton) and later ran two seasons at Oswego Speedway in upstate New York.

It was during the mid-1970s he switched to Late Model racing where he enjoyed much success at Flamboro, Delaware and Cayuga speedways running the popular number 10.

During his Late Model career he also ventured into New York, Ohio and Michigan for selected events against some of America’s best short track competitors.

His son Doug carried on the Brown racing tradition in 1995 through 2009 and in turn handed the racing reigns to his sons Mitch and Jake. The third generation drivers are now continuing the Brown family racing tradition by competing full time in the open-wheel Sprint Cars.

Harold Brown passed away July 13th 2014 at the Stedman Hospice in Brantford. He was in his 80th year.

Complete details regarding his funeral arrangements will be released late Monday.  Notice of his passing will be posted in the Brantford Expositor http://www.brantfordexpositor.ca/ on Tuesday July 15th, 2014

Posted on behalf of Doug, Sue, and grandsons Mitch, Jake, Ben and Aiden.