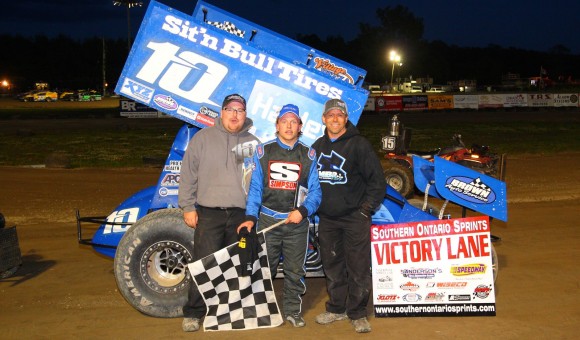 Strong at Ohsweken and Humberstone in Busy Weekend of Racing

It was a weekend of mixed emotions for Mitch Brown and his brother Jake on the dirt ovals of Southern Ontario.

On Saturday night Mitch Brown started his Haldex/Sit’ N Bull Tires/ Leitch Performance Engines/Strodes BBQ & Deli Sprinter outside the front row of the Southern Ontario Sprints A-Main at Brighton Speedway and led all 25 laps on route to his second victory of the season at Brighton. Brown outdueled polesitter Rick Wilson Joyceville, ON as the top duo ran first and second for the full distance.

The race saw five yellow flags for minor incidents. Glenn Styres spun over the berm in turn one on lap 11, which cost him his top-five position. Nine laps later, Tyler Rand came to a stop in turn four despite running in the top five.

Wilson had his best chance to get by Brown in lapped traffic with six to go, but when the caution came out for Rand on lap 20, Brown prevailed on the single-file restart.

Mitch Brown, Tyler Rand of Consecon, ON, and Justin Martin of Rodney, ON were the heat race winners.

On Sunday at Port Colborne’s Humberstone Speedway, Brown ran his most aggressive race of the season battling his way from a 17th-place start in the 20-lap A-Main to earn a fourth-place finish in the SOS event at the 1/3rd mile clay oval .

During warm-ups, Mitch Brown shattered the speedway’s track record with a time of 13.539 seconds.

Chris Steele from St. Catharines, Ontario was victorious for round four of the 2014 Southern Ontario Sprints Tour. He was chased to the checkered flag by Ohsweken’s Glenn Styres with Brad Malloy of Niagara Falls, Brown and Cory Turner of Caistor Centre rounding out the top-five.

John Burbridge, Jr. of St. Williams ON had a very strong run turn sour in the feature event when he spun in the apex of turn one after being clipped by Chris Jones of Picton, ON. Burbridge recovered to finish 12th.

With the weekend of racing for the Brantford racing brothers starting on Friday the 13th and a full moon partially hidden by late evening clouds Mitch Brown raced to a solid second place finish in his qualifying heat then settled for a comfortable fifth place run in the 20-lap A-Main.

For brother Jake, who won last week’s Crate Engine Sprint Car feature at the 3/8th-mile oval the results were devastating as the youngster crashed his race car on lap four of the 15-lap chase.

The driver of the APC, Port Dover Auto Parts, Strodes Express and Brown Auto Service who started tenth was battling to get around some slower cars when he and Ohsweken’s Robbie General made contact in turn 2 sending Brown’s car into a wild flip and roll eventually coming to rest on its wheels. The June 6th winner was uninjured, but the same could not be said for his car.

Ryan Hunsinger of Caledonia went on to claim his second Crate Engine Sprint Car feature victory of the season. 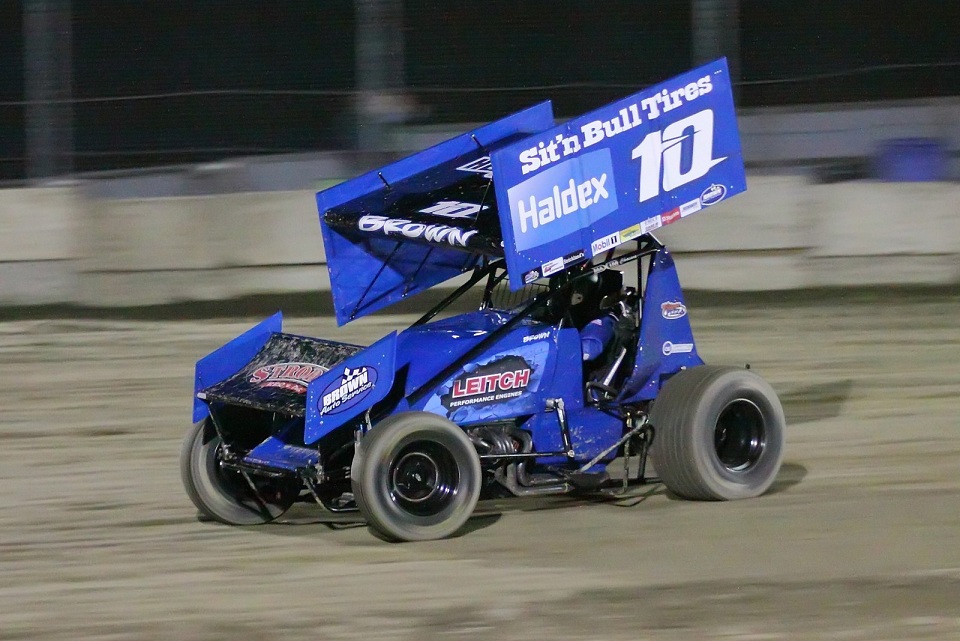