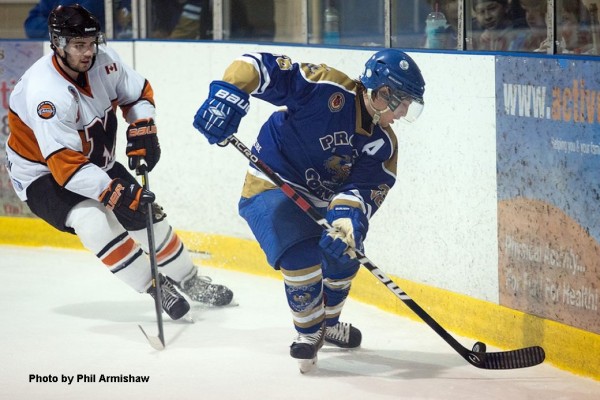 There is a little more than two months to go before the green flag drops on his 2014 Sprint Car season but for now Mitch Brown is still busy chasing the puck and a few opponents around the rinks in the Greater Ontario Junior Hockey League.

Mitch and his Junior B Caledonia Pro-Fit Corvairs captured the Golden Horseshoe Division Championship of the GOJHL, knocked off Port Colborne in the first round of the playoffs in four straight games and eliminated the Thorold Blackhawks in the second round winning four straight games after losing the opener in the best of seven series.

The Corvairs now face off against St. Catharines Falcons to determine who will advance to the GOJHL championship finals. That series opens Tuesday, March 25th in Caledonia.

In addition to capturing their division Championship, the Corvairs also cleaned up at the Golden Horseshoe Awards February 24th in St. Catharines. The team won awards in seven of the 11 categories including player of the year, most valuable defenceman and best goals against.

What makes Murphy’s achievements stand out is the fact he’s only 17.

“The player of the year award isn’t just for your performance on the ice but it combines school and volunteer experience,” said Corvairs’ head coach Mike Bullard. “At just 17, he’s a class act.”

Kyler Nixon (12 goals, 70 assists in 49 games) was awarded for the league’s most valuable defenceman and the Corvairs were given the award for best goals against — averaging just over two goals allowed per game.

“It shows the dedication the guys put in defensively. We had a stellar year,” Bullard said adding Nixon’s was the night’s only unanimous decision.

Despite their success thus far, the Corvairs recognize they have a tough battle ahead of them especially against the Falcons.

Although the Corvairs won the Golden Horseshoe Championship title it didn’t come without controversy.

When the final games of the league season ended, St. Catharines was atop the standings with 91 points to Caledonia’s 90 but the Falcons were penalized because they had dressed too many import players in their overtime losses against Welland and Caledonia on Jan. 31 and Feb. 1. By doing so, the Falcons were forced to give up two wins and lost the top spot in the Golden Horseshoe Conference and the entire league.

Corvairs general manager Brian Rizzetto had caught the Falcons’ error a week before the end of the regular season schedule and notified league officials of his concerns.

“It’s a very touchy situation, there’s no question,” said Bullard at the time of the ruling. “(St. Catharines) would have done the same to us if we were in that position. People are going to say that’s no way to win a season title, but in my books that’s not what we’re here for. We’re here to win a Sutherland Cup.”

Falcons’ head coach and general manager Frank Girhany said Caledonia was in the right to protest, but added the ruling “does not take away that we had a very good regular season. As I stated all year (a Sutherland Cup appearance) goes through Caledonia.”

For Mitch Brown, the 2013-2014 season represents his last season of eligibility at the Junior level of hockey in Ontario and nothing would please him more than to end it on a high note by helping his teammates capture the Sutherland Cup – emblematic of the Junior B Championship in Ontario