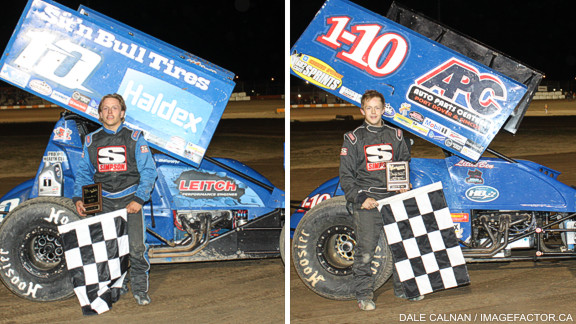 Although Brantford’s Mitch Brown is still heavily involved in his on-ice role with the Caledonia Pro-Fit Corvairs of the Greater Ontario Junior Hockey League, you can bet he’s still thinking about the upcoming start of the 2014 Sprint Car Racing season even though it’s still some fifteen weeks or so before the green flag drops.

On the ice the Corvairs are currently battling to stay atop the GOJHL 2013-2014 standings, and Mitch readily acknowledges his main focus at this time of year is on his leadership role with the team.

But as much as the youngster is passionate about both sports, there is little doubt being a two-sport athlete can present some tough decisions.

The third-generation driver opted to forgo the 2013 Canadian Sprint Car Championships at Ohsweken Speedway -the biggest annual dirt track event on Ohsweken Speedway’s and the Canadian motorsports calendar –because of his commitments to his Caledonia hockey team. That dedication also forced him to skip the final three events on the Southern Ontario Sprints schedule and some late season events on the US-Canada Patriot Sprint Tour.

In 2013 the oldest of two racing brothers enjoyed the most successful season in his four-year Sprint Car career –a season in which he won his third career feature race and finished third in Ohsweken Speedway’s highly competitive 2013 Corr/Pak Division championship standings. He was also solidly in third place in the SOS standings and had recorded 4 top-ten finishes in six-races on the Patriot Sprint Tour before heading to the ice surfaces.

Those skipped events cost him dearly in purse money but in looking back he doesn’t regret the decision.

“Yeah, those were tough decisions to make”, stated Mitch when questioned about his early departure from the 2013 racing scene. “But there is plenty of time left for racing. This is my last season of Junior hockey eligibility so I decided to make the best of it and help Caledonia make it all the way to the championships this season”.

The Corvairs are currently leading the GOJHL’s Golden Horseshoe Division by two points over St. Catharines with a game in hand and a dozen left on the regular season.

Although the 2014 racing season doesn’t get underway at Ohsweken Speedway until the beginning of May, (some series races start earlier) Mitch is nevertheless plotting an aggressive 2014 racing schedule which also includes the preparation of a Sprint Car for younger brother Jake to drive in Ohsweken Speedway’s recently unveiled developmental division.

Jake Brown is another same two-sport competitor who plans to follow his older brother in racing circles.

Currently his Hagersville Hawks are battling it out with Grimsby Peach Kings for the lead atop the OHA’s Niagara & District Junior C Hockey League.

As a former “Rookie of the Year” in Mini Stocks and with two years of Thunder Stock competition experience, the younger Brown has been quietly hoping to eventually join Mitch on the Sprint Car circuit and in 2014 he’ll get that opportunity in the winged, open-wheel machines powered by a new 602 GM Crate Engine.

NOTE: The team is currently seeking additional sponsorship/marketing partners for its 2014 racing programs.
(For details on how you can be a part of the team in 2014 see www.mitchbrownracing.com or contact Doug Brown at (519) 752-9531)