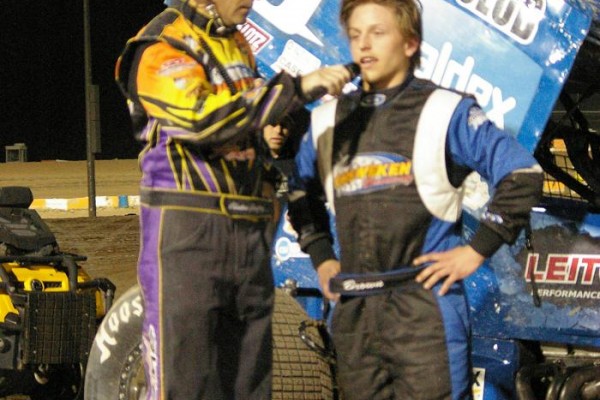 This Canada Day long weekend for many folks means an additional day off work relaxing around the house, at the cottage or heading to the lake for some boating or perhaps even to the fairways for an additional round or two of golf.

But for Mitch Brown and his teammates, it means three hectic days of racing on the increasingly popular Sprint Car circuit.

The driver of the Haldex/Pro-Fit Health Club/Strodes BBQ & Deli #10 Sprinter kicks off his weekend tomorrow night at Ohsweken Speedway where he’ll be competing in the “O’Neil’s Farm Equipment” presentation of the Corr/Pak Merchandising Sprint Cars, where he currently sits fourth in the standings.

On Saturday night he’ll travel to Merrittville Speedway –South of St. Catharines located at 2371 Merrittville Highway in Thorold, Ontario -to compete in the Empire Super Sprints Canada Day Special hoping for a repeat or better finish to his fourth place run in the Patriot Sprint Tour event back on April 27th.

“We’ll probably go with the same set-up we used back at the end of May,” team crew chief Doug Brown responded when questioned on the team’s strategy.

Sunday will see the team return to the Niagara area for another ESS night race at the new Humberstone Speedway located just two miles East of Port Colborne on Highway 3, just 17 miles west of the US/Canadian Border at the Peace Bridge.

It will be Mitch’s first experience at the 4/10th-mile oval but he’s done some pre-race research using Internet video clips to study the tracks complexities- a resource he utilizes when planning his racing schedule at unfamiliar venues.

Although the team’s ESS schedule for 2103 is limited, they appear confident they will fare well against the tough competition they will face in the touring series’ two events this weekend.

Adding to the team’s busy schedule is younger brother Jacob Brown who is anxious to get back to Ohsweken to race his Port Dover Auto Parts & Performance/Strodes Express/Brown Auto Service-sponsored Monte Carlo in the track’s Thunder Stock division.

Although he got off to slow start this season, the teenager enjoyed his strongest run last Friday night when he drove from a 24th place starting spot to eleventh in the division’s 20-lap A feature.

He’s hoping to improve upon that performance tomorrow night.