MITCH BROWN OFF TO SUCCESSFUL START IN 2013 SPRINT CAR ACTION 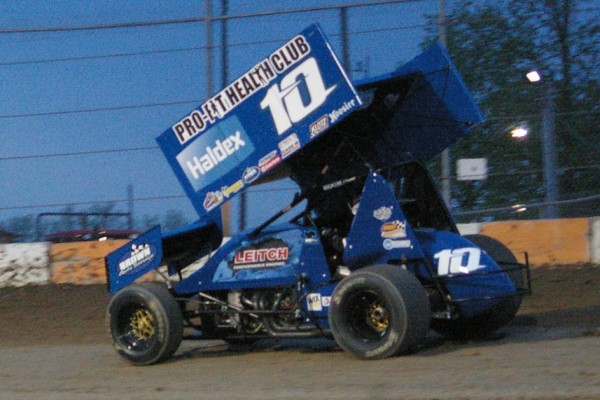 Last weekend Mitch Brown made it three successful starts in a row to his 2013 Sprint Car season with impressive back-to-back runs at Ohsweken and Brighton Speedways.

On Friday night at Ohsweken Speedway’s season opener, the Brantford competitor grabbed the checkered flag in his qualifying heat then won a hard fought battle with Hamilton’s Mikey Kruchka to finish third in the Corr/Pak Packaging-sponsored A-Main.

The following night the #10 team headed to Brighton Speedway where again Mitch was in top form placing third in his qualifier and finishing fourth in the A-Main.

In both events it was Glenn Styres of Ohsweken who claimed victory in the Sprint Car main events.

Combined with his first race of the season at Merrittville Speedway where he finished fourth in the Patriot Sprint Tour A-Main, fourth in his qualifying heat and win in a four-lap dash, Brown is off to his best season start since jumping into Sprint Car competition in 2010.

Mitch returns to the 3/8th-mile Ohsweken oval this Friday night for what is the first of three events on his busy weekend schedule. On Saturday the team then heads to Pennsylvania for two Patriot Sprint Tour events –Saturday at Bradford Speedway and Sunday at Eriez Speedway near Erie, PA.

While Mitch’s season todate has been highly successful, younger brother Jake’s season got off to a rather disappointing start when the transmission shifter cable broke forcing him out of his first qualifier and subsequently resulting in a DNS in the Thunder Stock A-Main.

The team believes they have solved the problem and will have his #10 Monte Carlo ready for a competitive run on Friday night.

THIS WEEK AT OHSWEKEN
This Friday marks the first return of the Sportsman to Ohsweken Speedway since 2008 with Grisdale Racing Products presenting the “Sportsman Shootout”. The Corr/Pak Merchandising Sprints, Affordable Towing & Recovery Thunder Stocks, HRW Automotive Mini Stocks, and Gale’s Auto Aftermarket Bombers are all part of round two of Ohsweken’s weekly Friday night racing series. Gates open at 6:00 with racing starting at 7:30!