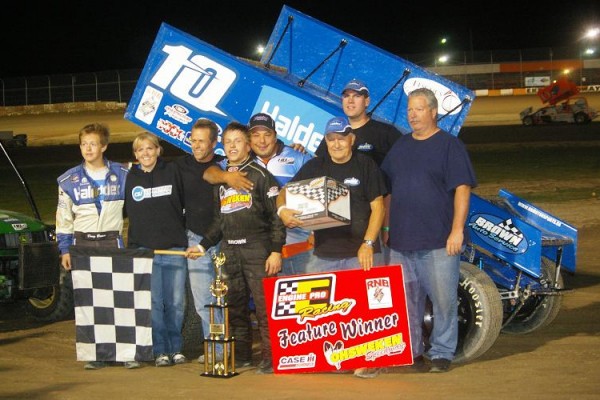 By Ken Spencer – It was more than just an average season for Brantford’s Mitch and Jacob Brown as both racing brothers earned some high marks in their respective divisions in 2011.

Mitch Brown, competing for only his second year in the fast, winged, open-wheel sport of Sprint Car racing finished the season with two feature wins and fifth place in Ohsweken Speedway’s Corr/Pak Sprint Car Division points and enjoyed a successful run on the Patriot Sprint Tour where he racked up some solid runs to finish eighth in the New York state-based series’ final standings.

In addition to his feature wins Mitch also enjoyed some other memorable moments during the season including the thrill of competing against NASCAR star Tony Stewart during his first Sprint Car trip to Ohsweken back on July 26th and the challenge one night later of running with the World of Outlaws during their only 2011 stop at the local track.

On the Mini Stock front, Jacob Brown, who earned “Rookie of the Year” season honours in 2010, was determined to battle for the divisional title at Ohsweken Speedway but was unable to claim the valued trophy despite some solid run throughout the 15-week schedule. Although he didn’t win any feature events in 2011 his season can still be considered successful by finishing third in the run for fun division.

With their racing seasons now complete both youngsters are busy with their hockey programs – Mitch with Brantford’s Golden Eagles Junior “B” team and Jacob with the Brantford AAA Midgets – where they compete with the same intensity they demonstrated during their past racing seasons.

To commemorate their season, HB Motorsports is preparing a special year-end edition of the team’s newsletter, recapping events at Ohsweken and on the Patriot Sprint Tour. This full colour 32-page magazine will be available shortly and will not only be of interest to race fans, it also offers businesses an opportunity to expand their marketing messages to a dedicated fan base through strategically placed ads in the publication.

Mitch and Jacob Brown along with the entire HB Motorsports team wish to thank the following sponsors for their support of the teams’ 2011 racing programs: