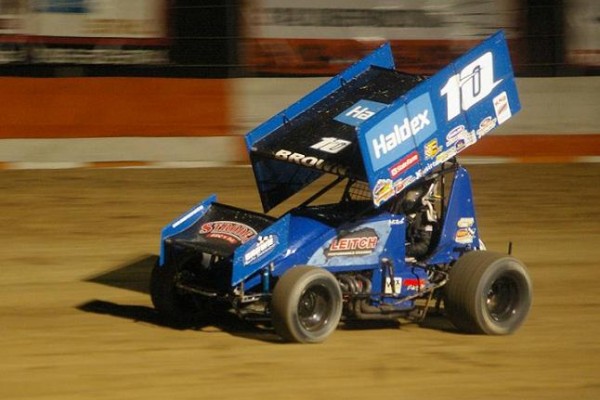 It seems like only a few weeks ago that Brantford’s racing brothers, Mitch and Jake Brown, were unloading their racecars to start the 2011 season.

Now the teenagers are preparing their cars and their individual mind sets for the heightened challenges they face leading up to the stretch drive on the schedule.

That countdown begins this Friday at Ohsweken Speedway as they head into the final three weeks of the local track’s regular points’ nights. Both drivers are in a good situation to hold onto or improve their top-five positions in the seasonal standings.

Mitch Brown currently sits fifth in the Corr/Pak Sprint Car divisional points’ race just 10 points out of forth-place currently held by Kyle Moffit of South Dayton, NY and 28 points behind third-place Jamie Collard of Burford who is rapidly closing the gap on points’ leaders Jim Huppunen of Fenwick and Kyle Patrick of Tilbury.

The older of the two third-generation drivers also has three Patriot Spring Tour events penciled into his schedule including this coming Saturday’s date in Brockville and Sunday’s race in Cornwall. Brown is currently ninth in that series points’ race despite missing several events due to his Ohsweken commitments.

“I know we have a top-five car in points at Ohsweken and feel confident we can stay there but I’d sure like to win another feature and put some strong runs together in the remaining PST races. That’s our goal and consistent runs would give us great momentum heading into the Sprint Car Nationals at Ohsweken in mid-September,” Mitch responded when asked about these final weeks of the 2011 season.

Jake Brown, who was in contention for the Mini Stock points lead from the beginning of the season through mid-July, experienced some bad breaks in late July and early August that dropped him to fourth in the standings. But he’s only 48 behind co-points’ leaders Karl Sault of Dundas and Abe Castelein of Cayuga and just 30 back of Caledonia’s Mike Evers.

During last week’s feature, the youngster recovered from a broken front strut that forced him to the pits early but he motored his way back from 28th-spot to finish fourth in the 15-lap event- a performance that attests to his driving abilities and potential for making a run at the title.

He too would like at least one feature win in the three remaining race dates at Ohsweken and feels the points deficit he faces will take care of themselves if he maintains a steady performance in those events.