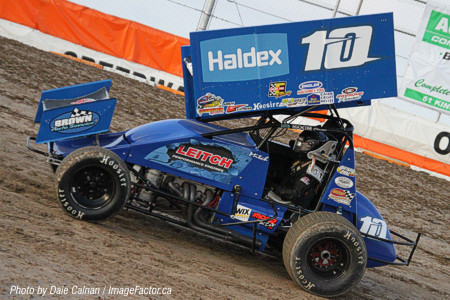 This past weekend was another of those three events in three straight nights for Brantford-based HB Motorsports. And although things could have been and should have been much better, especially for older brother Mitch, it can still be viewed as an encouraging sign the two young drivers are getting better as the season passes the half-way point.

On Friday night at Ohsweken Speedway both teenagers posted solid forth place finishes in their respective Sprint Car and Mini Stock feature events and had consistent runs in their qualifying heats,

Jacob Brown started 17th in the 15-lap Mini Stock main event and had worked his way to 10th-place by the end of the first lap. But entering turn three on lap two he was spun during a minor incident and had to restart at the back of the 21-car field.

By lap 10 he had moved to fourth place but ran out of laps in chasing the leaders to the finish line.

Jacob had qualified for the feature with a sixth-place finish in his heat race.

In the main event for the Sprint Cars, Mitch Brown started on the pole but was caught early by Jim Huppunen of Fenwick, Jared Zimbardi of Little Valley NY and last year’s track champion Dave Dykstra of Port Colborne but by staying on his usual inside line around the 3/8th-mile oval he held onto fourth-place at the end of the 25-lap race.

He had earlier run to a third place finish in his qualifier.

It was all hands on deck for the HB Motorsports Sprint car team as they headed down the 401 to Brockville and Cornwall speedways for Saturday and Sunday events on the Patriot Spring Tour.

In his first exposure to the high-banked Brockville Speedway oval, Mitch was on top of the wheel during practice and posted a fifth-place finish in heat #1. But at the outset of the 25-lap feature, he experienced steering problems when a tie-rod bolt came loose on his Haldex-sponsored car and forced the teenager to the pits early.

Despite hectic efforts by the team to repair the problem, time ran out and they were faced with watching the balance of the race from the sidelines. He was credited with a 21st-place finish.

Sunday’s trip, another 70-plus kilometres drive east to Cornwall was also a new experience at a strange track for the sophomore Sprint car driver but he was again fast in warm-up before posting a strong third-place finish in his heat.

But with the Teams lining up for their 25-lap feature, mother natured threw a wrench into the plans as a sudden downpour enveloped the area forcing an early end to the track’s racing programs.

When the 25-lap feature is staged, Jamie Collard of Burford and Mitch will lead the field to the green flag.

With his weekend performances Mitch Brown has moved into a 4th-place tie with Dain Naida of Tecumseh, MI in Ohsweken’s Corr/Pak points’ standings. Jim Huppunen leads the standings followed by Kyle Patrick of Tilbury and Burford’s Jamie Collard in third.