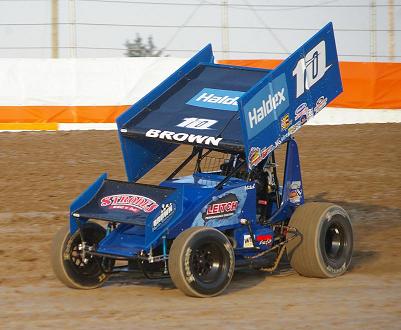 As Mitch Brown commented in his web site twitter prior to Friday night’s race, it was a ”Gorgeous day for racing at Ohsweken Speedway… New car is going to be bad fast tonight.”

Well, there was no denying the new car was certainly fast in its first race since being acquired less than 72 hours earlier, carrying Mitch to a solid third place finish in the opening qualifier, But things turned bad fast at the start of the 25-lap feature when an electrical problem forced the Brantford driver to head for the pits before the first lap was completed.

The team caught a break at the end of the first lap when a multi-car tangle brought out the red flag.

But despite frantic efforts of the team to trace the problem the car again faltered at the restart forcing Mitch to the pits for the balance of the night. The problem was later attributed to the car’s kill switch.

One could sense the disappointment in the driver and crew who had faced a major hurdle in having to work for three long days after acquiring a new chassis, body panels and an assortment of components to prepare for Friday night following the major accident that destroyed their only car at Eriez Speedway in Pennsylvania on the preceding Sunday night.

Things weren’t all that bad for the HB Motorsports racing brothers though.

Jacob Brown was having another strong night in Ohsweken’s Mini Stock division racing to a fourth-place finish in his qualifying heat then powering from a 15th-place starting position to earn second place honours in the 20-lap feature.

The youngster had moved to third place by lap four and took and held the lead two laps later until points’ leader Karl Sault caught and passed the driver of the #10 Strodes Express/Fescues’ Edge/Brown Auto Service Mustang on lap 15.

Both teams will be back in action this coming Friday night at Ohsweken Speedway then Mitch rejoins the Patriot Sprint Tour for events Saturday night at Brockville Speedway and Sunday night at Cornwall Speedway.