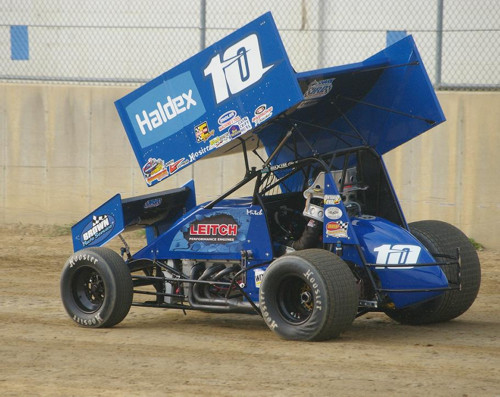 Is was quite a roller coaster ride for Mitch Brown over this past Canada Day/Memorial Day weekend, with three events on three straight nights of Sprint Car racing for the Brantford youngster.

The weekend started on a high for the recent high school graduate with a couple of solid third-place runs at Ohsweken Speedway –third in his qualifying heat and third in the main event but it ended with fireworks two nights later at Eriez Speedway at Hammond PA.

Brown started fourth in Friday’s main event but it was his steady pace using the inside groove throughout the 20-lap sprint that allowed him to maintain his track position and eventual move up one spot to third behind race winner Derek Jonathan of Lewiston NY and second place Dain Naida of Tecumseh. MI. Jim Huppunen of Fenwick and Kyle Patrick of Tilbury rounded out the top-five

The fireworks at Eriez Speedway wasn’t just the colourful 45-minute pyrotechnics display that lit up the sky midway through the 30- race Sunday night program.

None of the drivers were injured in the incident but there was substantial damage to Brown’s machine. So much so, some team members immediately headed back stateside Tuesday to pick up a new machine they hope to have ready for action this coming Friday night at Ohsweken Speedway

Leading up to Sunday’s major problem, Mitch was handicapped by electrical problems in the first of the two feature events accepting a 14th-place finish. He rebounded with a second-place finish in his heat and was credited with a 17th-place run in the second feature.

Sandwiched in between Ohsweken’s Friday night show and the Sunday event at Eriez Speedway was a Saturday stop at Little Valley Speedway near Salamanca NY where Mitch faced his first challenge on an intimidating narrow paper clip shaped ½-mile oval.

Despite the track’s long straightaways and short flat turns, the second year Sprint Car driver managed to finish 5th in a 4-lap dash, 7th in his heat and 14th in the feature.

Brown’s Saturday and Sunday results on the Patriot Sprint Tour dropped him to seventh in points.

While older bother Mitch was battling with the Sprint Car boys, Jacob Brown was also on track Friday night trying to chase down Mini Stock points’ leader Karl Sault of Dundas who had a DNF in his qualifying heat and didn’t start the feature.

Despite Sault’s failure to start the feature, Jacob was only able to work his Strodes Express/Fescues’ Edge/Eagles Nest-sponsored Mustang up to 9th-place at the finish.