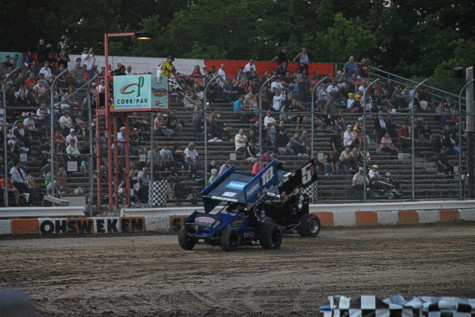 By Ken Spencer – Despite a full moon that hung over the speedway, it was a great weekend of dirt track racing for Brantford’s Brown brothers.

Mitch Brown scored his first win in Sprint Car action by nipping 2010 Sprint Car Champion Dave Dykstra of Port Colborne at the finish line in the second qualifier of Ohsweken Speedway’s Friday night program then settled for a tough ninth-place finish in the 20-lap feature.

Although he was hoping for better results in the track’s main event, the second year Sprint Car competitor continues to show marked improvement with each outing at the 3/8th-mile oval.

As the result of his night’s success, the driver of the Haldex/Strodes BBQ & Deli/Leitch Performance Engines Sprint Car now sits ninth in Ohsweken’s points’ standings after three nights of racing.

Bryan Howland of Auburn, NY held off Jim Huppunen of Fenwick, ON and Jared Zimbardi of Salamanca, NY to claim the victory in the tightly fought battle for the Sprint Car feature win while Jamie Turner edged out Kruchka for the 4th spot.

Jacob Brown continued his impressive run in the track’s Mini Stock division by piloting his Strodes BBQ & Deli/Fescues Edge/Brown Auto Service Mustang to a third-place finish in his qualifier then squeezed out points’ leader Karl Sault of Dundas at the finish line to claim third-place in the 15-lap feature.

The younger of the HB Motorsports team drivers, who was “Rookie of the Year” last season, is currently second in the Mini Stock standings and is determined to pursue his quest for the division championship won by his brother in 2009.

Mike Evers of Caledonia edged out Abe Castelein of Cayuga for the win in the Min Stock feature.

Although most drivers dispel any qualms about competing under a full moon, one has to wonder if the likes of Sprint Car competitors Travis Cunningham, Keith Dempster, and Kyle Moffit along with Mini Stock racer Jamie Goudge now have second thoughts as they all got upside down as the result of accidents during the hectic racing action.

Fortunately no one was injured in the wild night of racing on the clay oval.

On Saturday night, Mitch Brown and the HB Motorsports team travelled to Merrittville Speedway for another race on the Patriot Sprint Tour.

Mitch finished sixth in his qualifying heat but could only muster a 17th-place finish in the 25-lap feature.

Bryan Howland of Auburn, NY held off Jared Zimbardi for the victory.

The HB Motorsports teams will be back in action at Ohsweken Speedway this coming Friday night when Jones Brown Insurance presents the first round of the “Northern Summer Nationals”.

The Corr/Pak Merchandising Sprints will be joined by the Southern Ontario Sprints, ASCS Sprints on Dirt, and ASCS Patriots for the first of 4 rounds in the mini series. Lighthouse Tattoos Thunder Stocks, HRW Automotive Mini Stocks, and Pierced Parts Bombers are also part of round 4 of Friday Night Thunder.