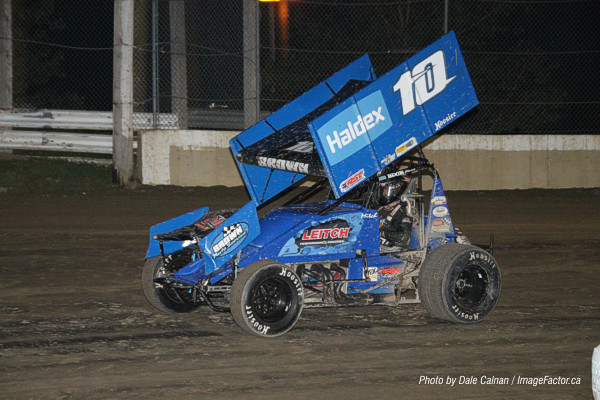 Mitch Brown had a strong run going under the lights at South Buxton Raceway on Saturday night until contact with the car of Port Stanley’s Chris Durand on lap 15 of the 25-lap main event ended what looked like a sure top-10 finish for the Brantford youngster.

Despite the spin that forced Brown to restart at the back of the 25-car field, he was able to salvage a 14th-place finish and remained upbeat regarding the racing incident and the performance of his Haldex Maxim Sprint Car.

“There was a bit of a skirmish going into turn 3 and I had to hit the brakes hard causing me to spin and make contact with the #67 car damaging my front wing,” reported the driver of the #10 Haldex/Strodes BBQ& Deli/Leitch Performance Engines sponsored team.

“It’s too bad too, because the car was the best it’s been on the short tracks this year’ he added.

He also ran well in his qualifying heat with a solid 5th-place finish.

The July 25th race was originally scheduled to be the second race of the Northern Summer Nationals four-event mini series featuring competitors from Ohsweken Speedway, the Ontario- based Southern Ontario Sprints, the Michigan-based ASCS Sanctioned Sprints on Dirt and the popular New York-based Patriot Sprint Tour but rain forced cancellation of Friday’s opener of the series at Ohsweken..

The final two events of the Northern Summer Nationals will take place on August 19 and 20 at Ohsweken and South Buxton respectively when the series point fund, along with a guaranteed starting spot in the seventh annual Arrow Express Canadian Sprint Car Nationals will be awarded

The team will be back in action again this weekend with three events on their ambitious schedule.

Jacob Brown will be back in racing form Friday night behind the wheel of his Strodes Express/Fescue’s Edge/Brown Auto Service Mini Stock.

The Sprint Car team then heads out for two Patriot Sprint Tour events south of the border with a Saturday night show at Little Valley Speedway southwest of Ellicottville, NY followed by the wrap-up race to their long weekend with a return visit to Eriez Speedway near Erie, PA.

“I’m really excited about this upcoming weekend to see a new track and get lots of racing, ” Mitch exclaimed, clearly indicating last weekend’s rainout at Ohsweken and the disappointing finish at South Buxton are not affecting that positive attitude he continues to display toward his racing efforts so far this season.

Despite missing a couple of events on this seasons’ Patriot Sprint Tour, Mitch Brown sits 5th in the touring series’ points standings. .