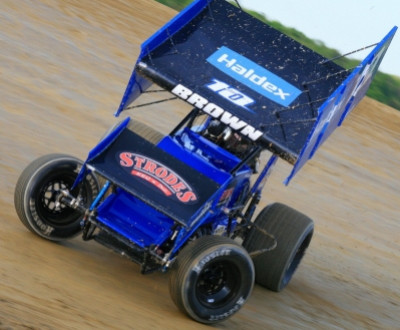 By Ken Spencer – With inclement weather continuing to play havoc with the season opener at Ohsweken Speedway, Mitch Brown and his team headed to the Southern edge of New York State on our Victoria Day weekend to shake the dust off his Haldex/Strodes BBQ & Deli Sprint Car

The event at Woodhull Speedway –a 1/3rd-mile clay oval southwest of Corning, NY- was event number four on the Patriot Sprint Cup Tour and the first for Brown since ending his 2010 schedule at Ohsweken -his home track.

The Brantford teenager had been anxious to go racing since his hockey season ended back at the end of March when his Brantford Golden Eagles Junior “B” team was eliminated from the playoffs.

Saturday night’s May 21st action at Woodhull Speedway served as another step in the learning curve for Brown, especially running on an unfamiliar track, But he was certainly up to the challenge, finishing fourth in his qualifying heat, fourth in the “Original Pizza Logs Four Laps of Fame Dash” and ran to an impressive eleventh place finish in the 25-lap feature despite a mid-race spin that forced him to restart at the back of the field.

“He was definitely up on the wheel for his first night out”, mentor and dad Doug Brown said in reporting the results. “It definitely gave him the added seat time which he was so desperately looking for.”

Given the way the weather has impacted the plans of local track operators, a few more visits to ovals outside the area are a strong consideration for the team over the balance of the season.
With inclement weather forcing the third cancellation of Ohsweken Speedway’s Friday night show (May 27th) the HB Motorsports team once again loaded up for a Saturday trip down the I-90 this time for a stop at Stateline Speedway just south of Jamestown, NY and a Sunday show at Eriez Speedway near Erie, Pennsylvania- both events part of the Patriot Sprint Tour.

In Saturday’s qualifiers, the Brantford teenager finished 5th in his heat, 6th in a 4-lap dash but he could muster only a 12thplace finish in the 25-lap feature.

On Sunday at Eriez Speedway, southeast of Erie, Pennsylvania the team was baffled by fuel injector problems that hampered the car’s engine performance in the qualifying heat restricting Mitch’s results to a 8th place finish.

With heat races already in the books, a massive series of storms pounded the Eriez Speedway for the first rain-affected Patriot race at the facility in series history.

The reminder of Sunday’s show will now be held on Sunday July 3, with an entire new Patriot Sprint Tour event being added that night to create a special Independence Day Holiday event. All 23 teams that were on hand Sunday will be able to compete in both features, with all other teams eligible to compete in the newly formed program.

After three events run on unfamiliar tracks, Mitch and his teammates are anxious to return to Ohsweken Speedway where they hope to show the local race fans and their fellow Corr/Pak competitors that the ventures south of the border have provided the young driver with some additional experience needed to race more competitively with the Ohsweken Speedway regulars.

Meanwhile, younger brother Jacob Brown is also anxious to get his season underway in the track’s Mini Stock Division.

Even though the start of his season has been delayed by inclement weather, Jacob Brown is furthering his knowledge of auto racing by working with his father and grandfather on brother Mitch’s racecar.