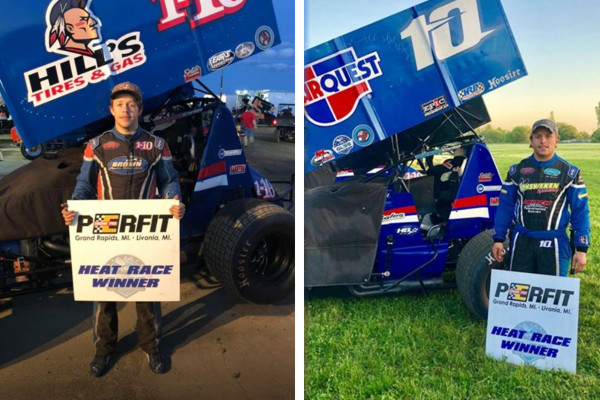 Finally, Brantford’s racing brothers Mitch and Jake Brown got the green flag to start their 2019 Sprint Car racing season on following five straight rainouts that affected tracks on both sides of the border.

Their three-day weekend of competition began Friday May 24th at Ohsweken Speedway followed by a two-day visit to Crystal Motor Speedway and I-96 Speedway in Michigan -tracks neither driver had competed on in the past.

Their original plans were to compete at Montpelier Speedway in Indiana on Saturday and partake of the “Johnny Appleseed Classic by Miller Lite” at famed Eldora Speedway in Ohio on Sunday but both events fell victim to wet weather.

Friday’s show at Ohsweken saw both brothers get off to a slow start that saw Jake run to a fourth-place run in heat one with Mitch coming home sixth.

In the A-Main Mitch battled his way to an eighth-place finish after starting thirteenth with Jake starting and finishing eleventh in the 20-lap chase.

In Saturday’s revamped schedule at Crystal Motor Speedway Jake Brown found the right groove around the unfamiliar 3/8th-mile oval turning fast time of 13.292 among the 26 competitors on hand for the Great lakes Super Sprints show.

The driver of the #1-10 Hills Tire &Gas, Auto Refinishers Canada, Strodes BBQ & Deli, Brown Auto Service Sprinter  then ran third in his heat and enjoyed a solid third-place finish in the 25-lap A-Main.

Mitch Brown also had an impressive night on his first career start at Crystal winning his heat and finishing eighth in the A-Main for his CarQuest, Brantford Hyundai, Strodes BBQ & Deli, Brown Auto Service-sponsored #10.

With Saturday’s satisfactory results, the team elected to stay over for the Sunday GLSS event at I-96 Speedway near Lake Odessa, MI where Mitch chased Litchfield, Michigan’s Jason Blonde to the checkered flag in heat 2 while Jake Brown won heat 4 with Ohio driver Phil Gressman and Indiana’s Brett Mann.

Jake Brown recorded his second podium appearance of the weekend with a third-place finish behind Gressman and Ohio’s Max Stambaugh in the A-Main with Mitch coming home seventh.

Saturday at noon! Yes noon -we decided to roll to Crystal Michigan and race with the GLSS , as first timers to Crystal we rolled out to a successful start with both cars qualifying top ten , MB first in his heat race and JB second in heat race and two top ten’s in feature. With night going well the team decided to stay and race I-96 Speedway in Ionia Michigan Sunday night ,another first time speedway for Brown Racing,  MB second in heat race, JB won his heat race and both cars had strong top ten finishes !

Next up week two at Ohsweken on Friday May 31st.