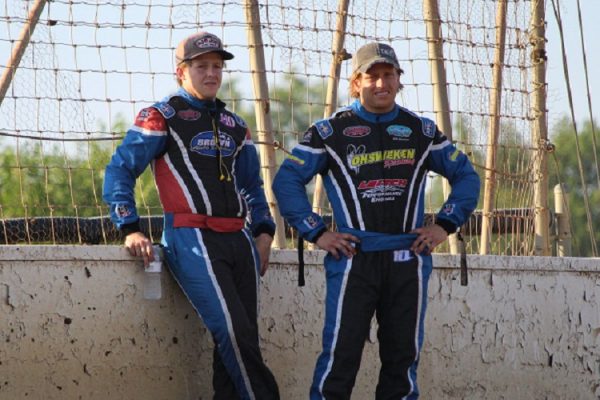 Saturday’s run down the 401 to Brighton Speedway again resulted in strong performances by Brantford’s Brown brothers in Southern Ontario Sprints action with Jake finishing third in his qualifier after a sixth place start and Mitch duplicating that run with similar results -a third place finish after starting sixth-in the third qualifying heat leading up to the night’s SOS 25-lap A-Main feature.

Cory Turner of Caistor Centre, ON led from start to finish in the main event by jumping into an early advantage from his pole position but he needed a flawless run to ward off several attempts to Mitch Brown who had started third in the 20-car field.

Despite opening up a half straightaway advantage in the clean air by lap seven Turner was about to encounter lapped traffic on lap eight but was saved by a caution on lap ten when Dylan Westbrook spun just as the fast closing Brown was about to overtake the leader.

Mitch got a great restart following the caution but his challenge was hampered by having to battle Chris Jones of Picton who had moved into third spot from his seventh starting spot with Jake Brown in fourth and outside pole sitter Jamie Turner in fifth.

By lap 17, the top three remained the same with Turner working into traffic again, this time maintaining his lead as he worked through the slower cars.

With five laps to go, two lapped cars separated Mitch Brown from the leading Turner and the race seemed in hand for the driver of the No.97. Then, with 23 laps complete, Cory tried to slide between two slower cars in turns one and two, moving up just in front of Mike Ferrell’s No.15. Slight contact between the front bumper of Ferrell and the tail tank of the No.97 pitched Ferrell sideways and caused contact with Mike Thorne’s No.55. Thorne came to rest on an infield tractor tire, ending his night.

The third and final yellow flag set up a green-white-checkered finish. In clean air, Cory Turner wouldn’t be denied the victory as he drove to victory over Mitch Brown and 2014 series champion Chris Jones.

Jake Brown finished a strong fourth with Ryan Turner edging up to fifth at the finish after starting 13th.