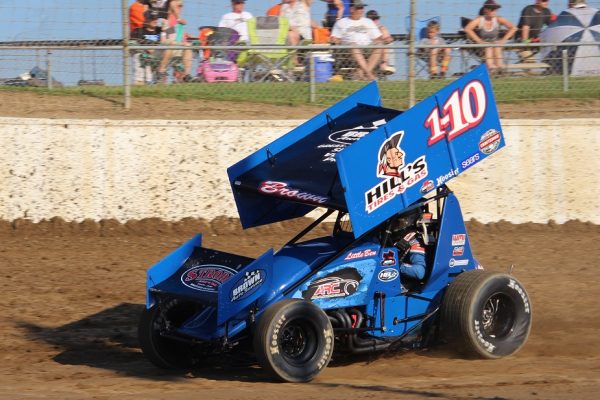 Mitch and Jake Brown headed south of Canada Day Weekend to compete with the NRA Sprint Invaders at Limaland Motorsports Park and Fremont Speedway. The trip marked the second time this season the Brantford-based teammates have headed to the Ohio tracks in keeping with their off-season decision not to tie their 2018 racing programs to any specific track or series.

After 2 straight rainouts, the weather finally took a turn for the good for the fans and teams at Limaland Motorsports Park on Friday June 29th as 90-degree temps and sunshine were a welcome change. Devon Dobie bagged his first feature win of 2018 in the K&L Ready Mix NRA Sprint feature with Jake Brown chasing him to the checkered flag for a strong second-place finish.

Dobie of Wapakoneta, OH and No. 1-10 Jake Brown led the field to green in the 25-lap A-Main with Dobie grabbing the early lead, hitting lapped traffic on lap 5 and seemingly setting sail, until No 22d Aaron Robnolte (Uniopolis, OH) brought out the red flag on lap 10 by flipping in turns 1 and 2. Robnolte was able to walk away, but his race was over. On the restart, No. 5M Max Stambaugh (Elida, OH) got a great run and looked to make his way into the top 4 until hooking a rut in turn 4 and getting upside down, ending his night. The red flag flew one more time for a 4 car pile-up on the backstretch that saw No. 49 Shawn Dancer (Delphos, OH) get upside down and No 2 Kyle Sauder (Archbold, OH) get tangled up then hit by No. 24 Kobe Allison and No. 15 Brandon Ferguson (Sidney, OH). All drivers would walk away, but their cars were done for the night. Dobie would power away on the restart, and hold off Jake Brown for the win, with No. 17 Jared Horstman (Ottoville, OH) finishing 3rd, No. 87 Jason Barney (Brewertown, NY) finishing 4th, and No. 10 Mitch Brown completing the top 5. Heat Races were won by Barney, No B20 Butch Schroeder, and Jake Brown. 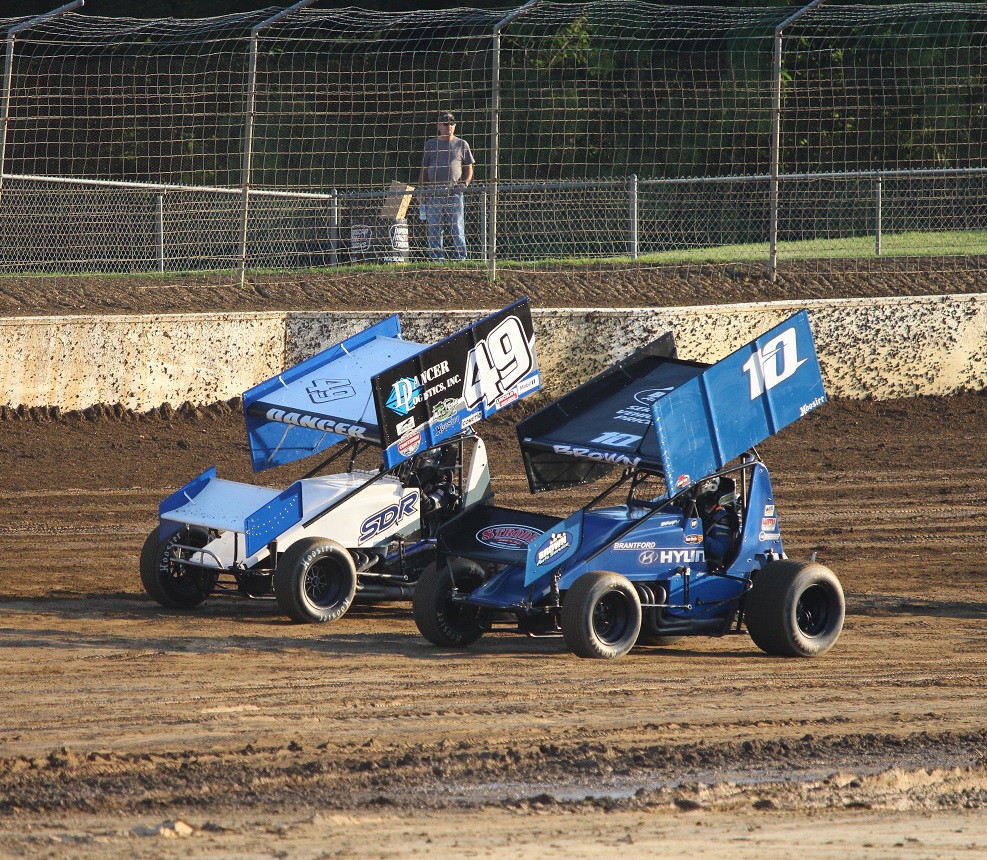 Jake Brown got off to a quick start in winning his qualifier while Mitch ran to a 3rd-place finish in his heat.

The following night at Fremont Speedway-the site of Jake Brown’s surprising feature win on May 26th with brother Mitch in tow-  the NRA 360 feature got off to a shaky start as a four car pile-up resulted in a second attempt. When the green flew outside front row starter Hannagan drove into the lead over Mitch Brown, Hud Horton, Devin Dobie and Tim Allison. A quick caution for a Bo Barber spin on lap four kept the field close. But, when the green flew so did Hannagan, pulling away from Brown while Dobie jumped into third. Mike Burkin brought out the caution on lap 12, wiping out a big lead for Hannagan.

On the ensuing restart Hannagan could not shake Brown and Dobie who waged an entertaining battle for second. Dobie, who won the NRA feature Friday at Limaland Motorsports Park, drove into second with seven laps to go and started to slowly reel in Hannagan. On lap 21 Dobie drove deep into turn three and caught the cushion and took a wild ride. When the race resumed, Hannagan drove away to the win over Mitch Brown, last place starter Jared Horstman, Horton and Tim Allison.

Both brothers drew starting positions in qualifying heat 2 with Mitch finishing 3rd and Jake 5th in the 8-lap chase.

The brothers intend to race at Ohsweken Speedway on Friday (July 6th) then head east to the Bay of Quinte area for Saturday’s Southern Ontario Sprints race at Brighton Speedway.

Mitch Brown -the 2015 SOS Champion-has generally run well on the 1/3rd-mile oval and will be looking to avenge his second-place finish in this season’s SOS opener on June 16th when he was overtaken by 2016-2017 Champion Dylan Westbrook on lap 23 of the 25-lap A-Main.