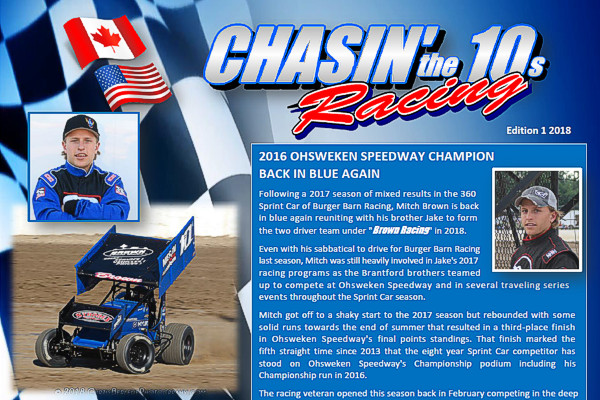 The 2018 local racing season here in Southern Ontario has been underway since mid-May and there’s certainly been some surprising changes unveiled in the activities of Mitch and Jake Brown.

Stalwarts of Ohsweken Speedway’s Friday night programs with perfect attendance records since they began their the racing careers  -Mitch from 2007 through 2017 and Jake from 2013 through 2017 – they surprised a lot of fans and fellow competitors by skipping the May 25th and June 8th shows at their home track.

And although they will continue to make periodic appearances at Ohsweken, there will be a more such absences as the season advances.

It’s all part of the unfolding plans of the Brantford-based teammates for 2018 -this year running under the renaming of the team to “Brown Racing” reflecting the increased activities of Jake Brown in the team’s operations and activities.

Those plans will see the brothers choosing events from a broadened list of weekend tracks and series throughout New York, Ohio, Michigan, Pennsylvania and Indiana featuring winged 360 Sprint Cars.

As noted by the team’s Spring “CHASIN’ the 10s Racing” newsletter, Mitch had already seen action in a number of  Sunshine State events in February and April before being joined by younger brother Jake when the local season got underway. Coverage of events the team has run since early May through June 16th is included in this editions coverage.

One might define their 2018 plans as “Winging It” with a program that breaks from their past tradition of focussing their efforts on a particular track or series.

Further information on the team’s activities can be found in the team’s website “mitchbrownracing.com”