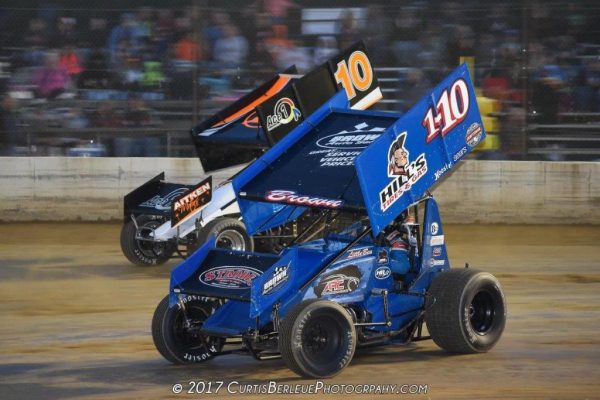 Brantford’s Mitch and Jake Brown will be among the top 360 Sprint Car drivers from Ontario, Quebec and Northeastern United States heading to Ohsweken Speedway this coming weekend for the track’s 13th Annual Arrow Express Canadian Sprint Car Nationals – an event that will see over 60 teams contest for one of 30 qualifying spots in the 35 lap A-Main feature race. The event will again pay $12,000 USD-to-win and $1,000 USD-to-start along with several other cash awards.

Mitch finished ninth in last year’s event and had two previous appearances finishing thirteen in 2014 and again in 2015.

Jake ran to a 21st finish in last year’s event – his first attempt in running the annual classic for the winged, open-wheel race cars.

Mitch Brown got off to a rough start at Ohsweken Speedway in 2017 with a DNF in the track’s May 19th season opener and had some other anxious moments before reaching the tempo that earmarked his impressive performances of four, top-three championship points finishes in the past four seasons standings -including last year’s championship title run.

Despite that opening night setback he recovered with ten top-five feature finishes over the balance of the season including a feature win on August 18th.

Mitch also recorded three podium finishes in the four appearances he made on the Southern Ontario Sprints schedule in 2017 including a big win on Labour Day weekend at Brighton Speedway.

Jake Brown had some impressive runs in his second year on the Sprint Car circuit finishing seventh in Ohsweken’s final points standings in 2017 with a record of nine top-ten runs -four in the top five.

He also won an SOS event at Brighton Speedway on Labour Day weekend.

Both brothers also competed in Patriot Sprint Tour events on both sides of the border as well as selected competition with the Empire Super Sprints, Southern Ontario Sprints and the co-sanctioned Great Lakes Super Sprints / NRA Sprint Invaders series competing at tracks in Northwestern Ohio, Northern Indiana and Southern Michigan.