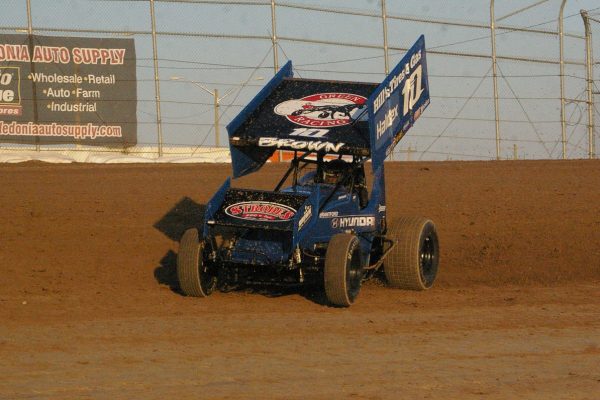 Mitch Brown heads to Ohsweken Speedway this Friday (September 2nd) for the track’s Championship Night event knowing that all he has to do is start the A-Main feature race to clinch his first Kool Kidz/Corr Pak 360 Sprint Car Division track title and a $5,000 share of the point fund.

Despite handling problems that have plagued his race car in recent weeks, the Brantford driver holds a 51 points margin over Rookie of the Year candidate Dylan Westbrook of Scotland, ON and 64 over Dain Naida of Tecumseh, MI with brother Jake Brown and Dave Dykstra rounding out the top-five.

Mitch Brown has been in the championship chase at the “Big O” for the past three seasons finishing third in 2013, second in 2014 and third again last season, a year in which he saw his championship bid evaporate with three weeks left in the schedule when engine failure befeld his Haldex-sponsored Sprint car.

Entering the August 26th event at Ohsweken, the Brantford competitor led 2010 track champion Dave Dykstra of Port Colborne, ON by 65 points and Westbrook by 74.

But when the night was over Brown struggled to an 10th-place finish in the A-Main while Dykstra’s bid to catch the points’ leader ended early when he went for a frightening tumble entering turn one in his qualifier after clipping the right rear wheel of Alex Hill’s car in his qualifying heat.

Dykstra was uninjured in the flip but his car was badly damaged. He also took a severe hit in the standings dropping to fifth place.

JAKE BROWN IN THE CHASE FOR “ROOKIE” HONOURS
With his fourth-place finish in last week’s A-Main, Jake Brown jumped up to fourth-place in the standings and now finds himself 32 points behind Westbrook in the battle for Rookie of the Year honours.