Brantford Sprint Car drivers Mitch and Jake Brown took Civic Holliday weekend off from their busy racing schedule to catch some much needed R&R as they head into the home stretch of Ohsweken Speedway’s 2016 schedule.

The brief respite also gave the older of the two racers an opportunity to take a close look at his car to determine what needs to be done to overcome some frustrating issues that have plagued his runs since switching to a new chassis a couple of weeks back.

“It’s basically the same style of chassis we’ve been running for a few years but something appears to be off in this one that’s affecting the overall handling” remarked crew chief chief Doug Brown when discussing the team’s concerns.  “If we can’t solve the problem we may have to revert back to the old chassis especially with the weeks winding down in Ohsweken’s 2016 schedule” he added.

Counting this upcoming Friday night event (August 5th) , there are only five nights of racing counting towards the season championship remaining on Ohsweken’s seasonal calendar.

In recent outings, Mitch raced to a 6th-place finish in the first of two 20-lap A-Mains on July 22nd (the first being the rescheduled feature from July 8th) then won an exciting battle with Paulie Colagiovanni of Marsellus, NY for second place in the second A-Main won by Jim Huppunen of Welland, Ontario.

On a rare Monday night event at Ohsweken on July 25th, Mitch just missed a podium finish coming home fourth behind NASCAR star Kasey Kahne of Enumclaw, WA, (who was making a his first appearance in a Sprint Car at Ohsweken), Parker-Price Miller of Kokomo, IN and Dave Dykstra of Port Colborne, ON.

The following night he was the second fastest Canadian in time trails for the annual Arrow Express Six Nations  Showdown featuring the travelling World of Outlaws Sprint Cars and finished sixth in his qualifier. But his 700 hp 360 engine was no match for the more powerful 900 hp 410 engines run by the WoO regulars resulting in a 20th-place finish in the 30-lap A-Main.

That events was won by Donny Schatz of Fargo, ND  -his 16th World of Outlaws Craftsman Sprint Car Series victory of the season. It was also his third win in his last four starts in the annual special at Ohsweken. 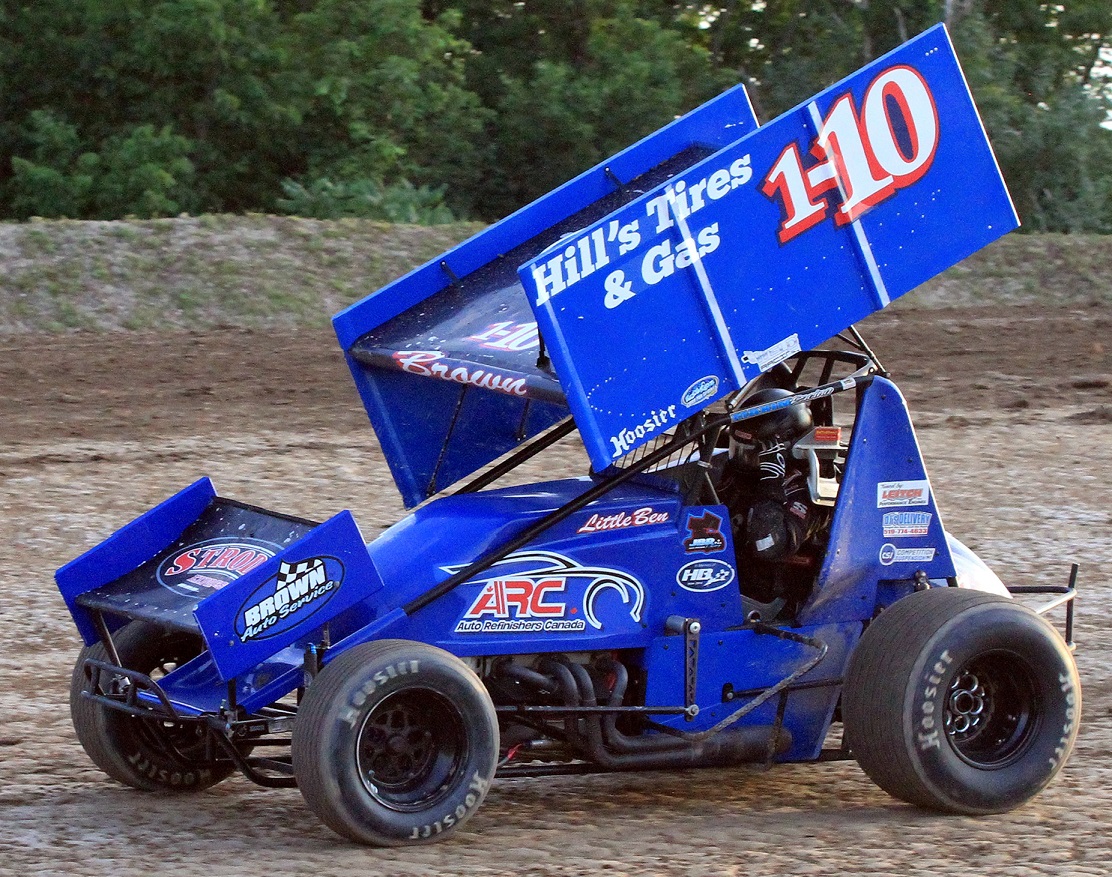 Jake Brown continues to post some impressive runs in his first season of 360 Sprint Car competition finishing 4th in the rescheduled July 8th A-Main on July 22nd, then coming home with a 9th-place finish in the night’s regular feature.

In the July 25th special he had some mechanical issues and failed to finish his qualifier but made up for it by winning the last chance B-Main after starting eighth then moving into the lead on lap two of the 10-lap chase to secure a starting spot in the A-Main.

He was running well in the feature and appeared destined for a top-ten finish but spun by himeslf on lap 16 eventually culminating in a 14th-place finish.

Jake sat out the Tuesday World of Outlaws show.