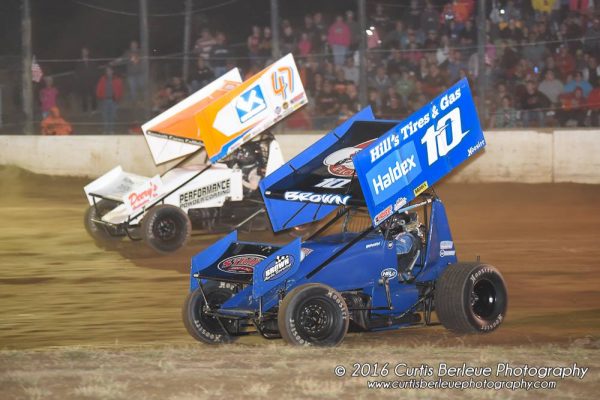 The combined Canada Day holiday and the Independence Day weekend for our friends south of the border made for a busy schedule for Brantford’s Mitch Brown and his brother Jake on the open-wheel Sprint Car circuit.

On his trip to Brewerton Speedway, north of Syracuse, NY Mitch started on a winning note running to victory in his qualifying heat, then led the first 14 laps of the 25-lap A-Main before being caught and passed by Mike Mahaney of King Ferry, NY.  Following a restart on lap 19 Brown got caught in a mad scramble for position and dropped to 8th spot in the closing laps.

At Canandaigua Motorsports Park , southeast of Rochester, NY the following night Mitch finished third in his qualifier but just couldn’t find the right line around the 1/2-mile oval finishing 14th after starting sixth in the 24-car field.

Friday night at Ohsweken Mitch ran away with his qualifier then battled his way to a 5th-place finish in the A-Main.

Saturday at Mercer Raceway Park in Pennsylvania, Mitch caught up with the Patriot Sprint Tour winning his heat then just missed a podium finish in the A-Main with a 4th-place run in the 25-lap chase.

In Sunday’s PST event at Eriez Speedway near Erie, PA Mitch again won his qualifier then battled his way to a fifth place run in the A-Main 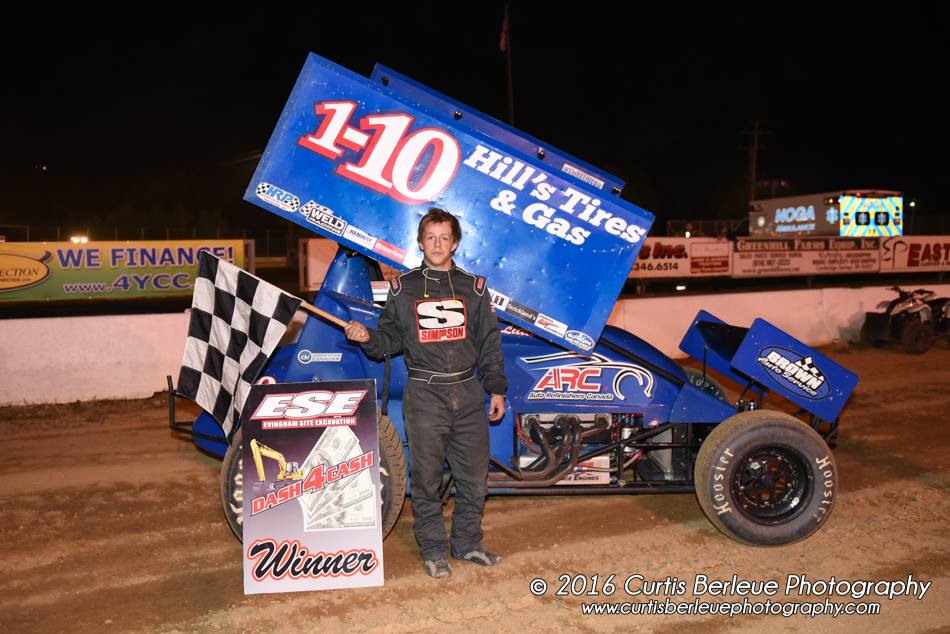 Jake Brown joined his brother for the last three events on the busy weekend winning his heat on Friday at Ohsweken. But a unusual incident in the A-Main saw his battle to retain second spot in the standings wilt when a clump of mud dislodged the radiator cap from his #1-10 Sprinter midway through the 25-lap race forcing him to the pits during a caution flag.

Although he returned to the track as the race was about to resume he was credited with a 16th-place finish dropping him to sixth-place in the tight points race. Despite the setback he continues to lead Scotland, Ontario’s Dylan Westbrook in “Rookie’ standings heading into this Friday’s event at Ohsweken.

Shaking off the Friday finish, Jake recovered to display some strong runs in the Patriot Sprint Tour’ s Pennsylvania events finishing 4th in his heat, winning the 4-lap dash and running to a steady 11th-place finish in the A-main at Mercer.

On Sunday at Eriez Speedway he finished 4th in his qualifier then ran to an impressive 6th-place run in the A-Main.

Both drivers will be back at Ohsweken Speedway this coming Friday with Mitch likely to run with the Southern Ontario Sprints on Saturday at Brighton Speedway.