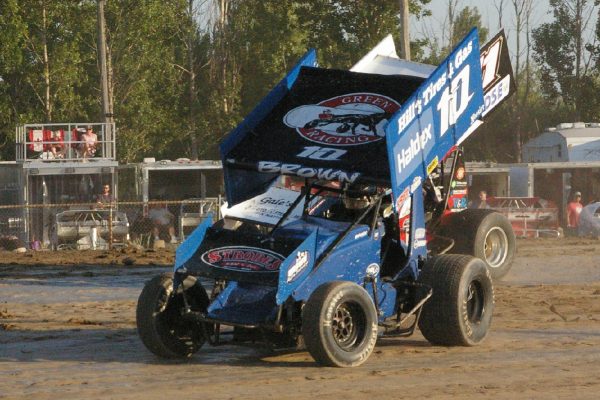 Mitch Brown enjoyed another strong night of racing at Ohsweken Speedway on Friday night finishing second to Steve Poirier of Saint-Mathieu-de-Beloeil, QC in the night’s Kool Kidz-Corr/Pak 360 Sprint Cars A-Main and was contending for a podium finish on Saturday night in the Empire Super Sprints 25-lap feature at Merrittville Speedway until he suddenly pulled to the side of the track as the race was about to resume following a mid-race caution.

Saturday’s problem was later attributed to a broken stud on the car’s power steering pump.

“Nothing serious, just bad luck”, reported the disappointed driver following the race “but because the fuel pump runs off the power steering pump we were unable to continue.”

He was running fourth at the time of the incident after starting 10th in the 24-car starting field.

The ESS feature race was one of the most exciting finishes in ESS history with Ryan Turner of Caistor Centre, ON, Matt Tanner of Stephentown, NY and Quebec competitor Jordan Poirier running three wide lap after lap until Tanner forged into the lead for good on the last lap coming from 12thstarting spot.

Jake Brown continues to put up strong performances at Ohsweken Speedway in this his “rookie” season of 360 Sprint Car competition.

On Friday night he started 9th and finished 8th in the A-Main. Saturday he made his debut with the Empire Super Sprints finishing 14th and earlier ran to a strong 3rd in the 4-lap dash after starting 6th.

Mitch Brown continues to lead the 360 Sprint Car championship standings at Ohsweken, while his brother Jake is 2nd and leads the Rookie of the Year standings.

Both drivers will be back in action on Friday night -July 1st -at Ohsweken when the Southern Ontario Sprints will be the featured attraction.