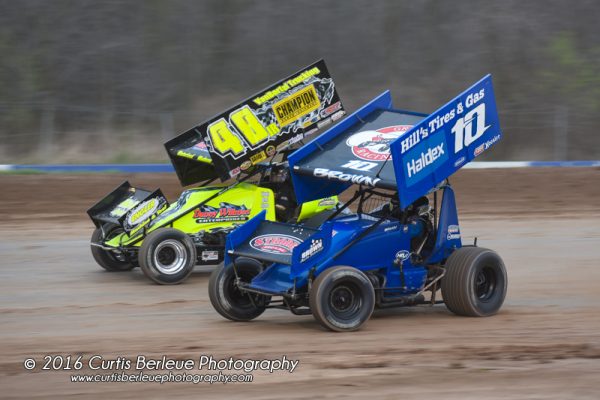 Brantford brothers Mitch and Jake Brown will be heading to Ohsweken Speedway on Friday night anxious to get their local racing seasons underway at their home track.

Mitch Brown has already seen some early season action on the Sprint Car circuit with events south of the border in Florida, the Carolinas, Ohio and New York and the opener of the Patriot Sprint Tour Series at Merrittville Speedway near St. Catharines on April 23rd where he finished third in the 25-lap A-Main.

Mitch finished third in last year’s points standings at Ohsweken when late season engine issues felled his chances for a run at the championship.

He’s certainly hoping to recover from that disappointment by once again being among the leaders when the 2016 season chase to the title winds down in September.

Since his 2010 “Rookie” season in the winged, open-wheel race cars, the 23 year-old competitor has complied 4 top-five finishes in the standings and was award with the track’s prestigious “Driver of the Year” award for 2014.

Following Friday’s event at Ohsweken, Mitch will head east to Brighton Speedway in Northumberland County (west of Trenton, ON) for the opener of the Southern Ontario Sprints season ready to defend the series’ championship he won in 2015.

Jake Brown’s Friday night debut on the local scene will be his first in 360 Sprint Car competition following two seasons in the track’s 602 Crate Sprint Division where he finished third in the 2014 standings and second last year. It will also be the first time he has competed against his older brother since entering the sport of dirt track racing in 2010.