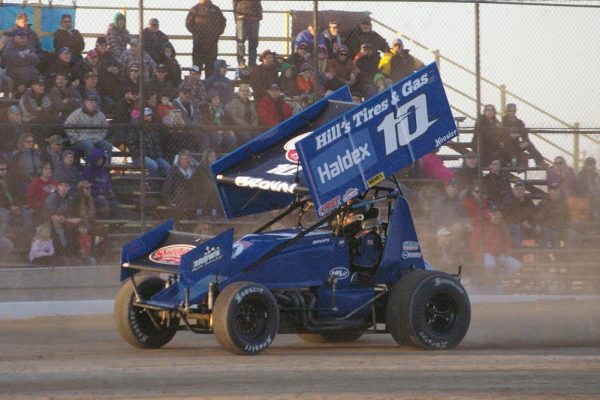 Mitch Brown chased Jason Barney of Brewerton, NY and Jared Zimbardi of Bradford, PA to the checkered flag at Merrittville Speedway Saturday night in the season opener of the Patriot Sprint Tour’s 2016 season.

The Brantford competitor’s results marked the third time in as many outings this season that he has placed among the top three finishers in Sprint Car feature races. His earlier podium appearances came at Lancaster Speedway in South Carolina and Limaland Motor Speedway in Ohio.

(He also finished third in the PST opener last season at Merrittville with Barney also taking that win).

In Saturday’s event, Barney -who started on the outside of the front row -grabbed the lead from pole sitter Matt Tanner of Stephentown, NY on lap 4 of the 25-lap A-Main and Tanner was overtaken by 3rd-place starter Steve Poirier of St. Mathieu De Beloeil, QC’ three laps later. But Brown, the 2015 Southern Ontario Sprints champion, overtook the 2015 Empire Super Sprints Champion for the runner-up spot on lap 11.

Brown, who started 8th and Zimbardi, who had started 5th but slipped back in the early laps, raced side by side over the final half of the race with the defending PST Canada Champion edging past Brown in the closing laps.

Saturday’s “Spring Sizzler” saw 30 Sprint Cars on hand for the event but with the temperature dipping to single digits it was apparent the competitors were in a hurry to get home running the 25 laps non-stop.

Mitch Brown will make up to five more trips south of the border for NRA Sprint Invader and Patriot Sprint Tour events before he gets ready for the opener of Ohsweken Speedway’s season on May 20th.