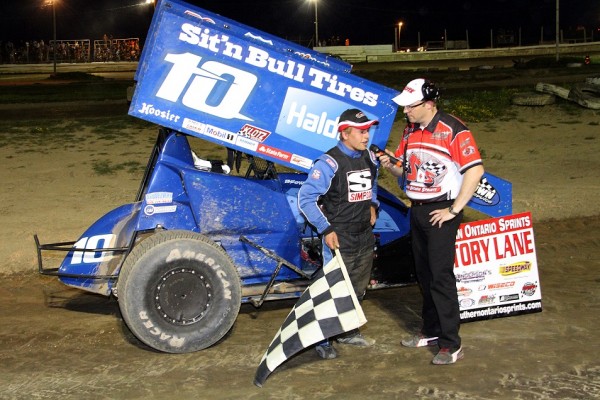 With the way the points are structured, Brown merely has to fire up the engine in his Haldex, Pro-Fit Health Club, Route 54 Gas and Variety, Leitch Performance Engines, Strodes BBQ & Deli Sprinter to clinch the title.

But rest assured, the Brantford youngster is determined to not only start Friday’s final but also to cop his third SOS feature race of the season.

Three weeks ago the 22 year old was second in Ohsweken Speedway ‘s Corr/Pak Merchandising Sprint Car division standings just 2 points behind leader Glenn Styres but his bid for a run at this year’s championship went up in smoke with engine failure following his heat race . Despite a furious attempt to replace the engine loaned to him by Cheektowaga’s Todd Hoddick, Brown and his teammates were unable to get the car started for the last chance B-Main, costing him valuable points and eventually dropping him to third in the track’s final standings.

Styres claimed his second consecutive track championship by 16 points over Hoddick with Mitch Brown ending 37 back of the leader.

With the engine problem of August 21st, Mitch was also forced to skip the final two races of the Patriot Sprint Tours Canadian tour dropping him from third to eighth in that series’ final standings.

Following the Merrittville race, Mitch will wrap up his 2015 Canadian racing schedule on September 18th-19th in the 11th Annual Canadian Sprint Car Nationals at Ohsweken Speedway. 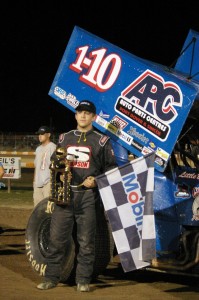 Jake Brown took the lead of the Crate Sprint Car A-Feature on Friday September 4th before the halfway mark of the 20 lap race, and went on to claim his first win of the season.

The win marked the 7th time this season Jake has finished fifth or higher in the 12 events run in 2015.

Jake will be back in action this Friday at Ohsweken in a special non-points night for the Crate Sprint Cars along with the UMP Modifieds, Thunder Stocks, Mini Stocks and Vintage Cars. along