MITCH BROWN AMONG THE LEADERS IN THREE SPRINT CAR SERIES 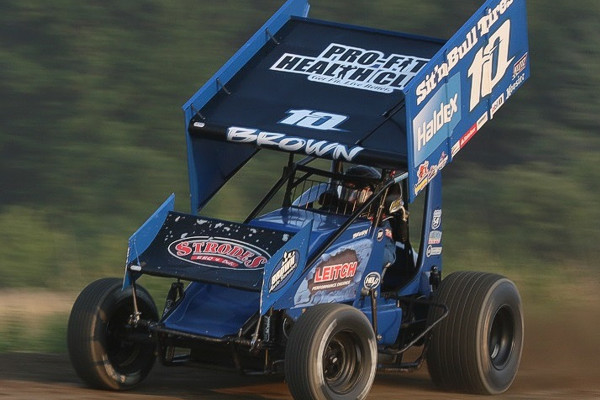 Mitch Brown has yet to win a championship in Sprint Car competition but that may change as the Brantford driver’s local season heads into the closing laps.

Not a bad record considering the seasoned competitors he faced each week in a sport that is without question one of the toughest forms of motorsport. But when last season ended he felt he could have done better.

As this season winds down, the Brantford youngster is determined to prove his point.

The 22 year old currently leads the Southern Ontario Sprints championship standings by 58 points over Styres with just three races remaining on the 2015 schedule.

That series’ remaining events will take place at Brighton Speedway with a double-header weekend September 5th and 6th and the final set for Merrittville Speedway on September 11th.

Those three drivers have swapped leads atop the standings in recent weeks and are bound to generate an exciting battle for the championship that may not be decided until the final points night on September 4th.

Brown will also be see action this weekend at Brockville Ontario Speedway (Saturday) and Cornwall Motor Speedway (Sunday) for the final two events on the Canadian Patriot Sprint Tour schedule where he trails American drivers Jason Barney and Jared Zimbardi in the championship standings.

Barney of Brewerton, NY leads that points standings with 555 points with Zimbardi of Bradford, PA second at 549 and Brown third with 522.

With Mitch gaining much of the headlines, his younger brother Jake remains in second place behind leader Dylan Westbrook of Scotland, ON in Ohsweken’s Stricklands GMC-sponsored Crate Sprint Division with three events left in the second-year divisional standings.

Jake has amassed a record of 11 top-ten finishes (6 in the top-five) in the eleven feature events run to date.