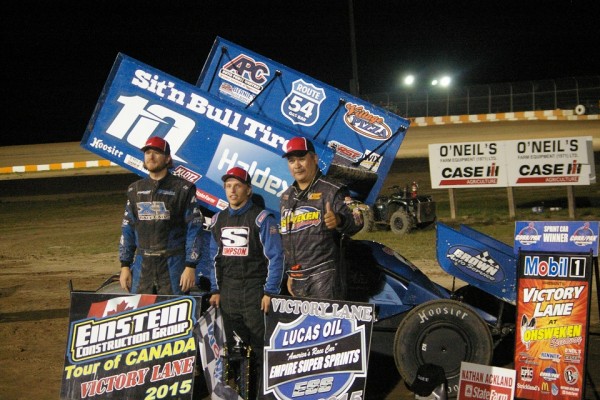 Posts Two Other Podium Finishes in 3-Days of Weekend Racing

The victory marked the Brantford driver’s first career win in ESS competition and his fifth A-Main feature win this season on the Sprint Car racing circuit.

Brown started fifth in the feature event and passed early leaders Rob Dietrick of Farmington, NY and Cory Turner of Caistor Centre, ON on lap 12 after the two had waged a persistent battle for the lead. Once in front Brown then had to deal with lapped cars as Jason Barney of Brewerton, NY and Styres started to close the gap in the final laps. ESS points leader Steve Poirier of St. Mathieu de Beloeil, PQ, and Turner rounded out the top five.

The win for Mitch was his second in as many races following his surprise victory at Montpelier Motor Speedway (Montpelier, Indiana) last Saturday.

Despite his jubilant victory at Ohsweken, Brown didn’t realize just how close he came to not finishing the race when a bolt on a tie rod end snapped as the team was pushing the car into the post-race technical inspection garage.

One more lap in the race could have spelled disaster for the youngster who is gaining increasing popularity among race fans and certainly his competitors (as witnessed by the congratulatory hugs he received from Barney and Styres in the winner’s circle), but he simply shrugged off the potential problem as part of the gamble a driver must face given the terrific pounding cars take on the ever changing clay racing surfaces.

Mitch Brown didn’t have much time for celebration Friday as he was on the road the following morning heading to Brighton Speedway for event number seven on the Southern Ontario Sprints schedule.

Saturday was another night of tension for the six year veteran of Sprint Car racing as the engine let go in his race car just as he passed under the checkered flag after finishing second in the first race qualifier.

He and his crew immediately went to work replacing the engine and he was back on the track in plenty of time for the feature where he started fourth and went on to finish third behind first time winner Cory Turner of Caistor Centre, ON and defending SOS Champion Glenn Styres of Ohsweken, ON.

Sunday at Humberstone Speedway, Mitch had an even tougher time with 22 cars in the starting field. He started the 25-lap event eighth but was running fourth by lap 2.

Ryan Turner lead for the opening 3 laps until Glenn Styres, who had started 4th, powered around the top lane to take the lead. The battle for second heated up as both Brown and Chris Steele moved past Turner and into the top three. Lapped traffic worked to Steele’s advantage and he made a daring move to take the second position away from Brown through the middle stages of the race.

At the finish it was Styres, Steele and Brown with Ryan Turner holding on to fourth place with Jim Porter completing the top-five.

Mitch Brown remains 2 points behind Styres in Ohsweken Speedway’s points standings and still has a sizeable lead atop the SOS Championship leader board.