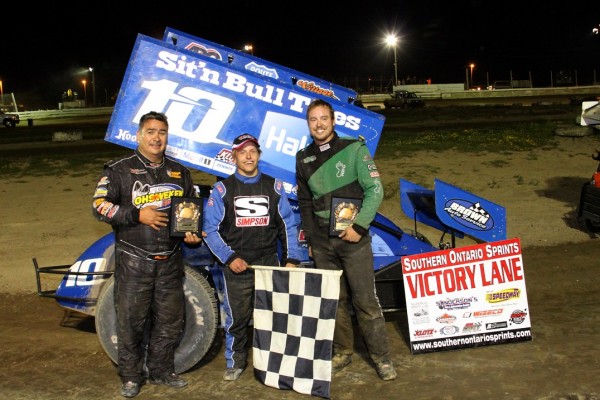 While most athletes relish an opportunity to compete in their respective sport two or three times a week, it can be a grind if you’re not fit and up to the challenge.

But six events in six straight nights can be an even greater challenge especially for race car drivers when competing wheel to wheel in 1400 lb, 700 hp race cars on unforgiving tracks where the racing surfaces change with every lap around of the circuit.

Mitch Brown engaged in such a week of open-wheel racing that began on Tuesday June 30th at Ohsweken Speedway and wrapped up on July 5th at Eriez Speedway near Erie, PA. Jammed in between those dates was a trip to New York State for races at Brewerton Speedway and Canandaigua Motor Sports Park as part of the Empire Super Sprints schedule; a return to Ohsweken Speedway for Friday’s fifth race of the Southern Ontario Sprint series competition; a journey down the 401 for race number six on the SOS schedule before heading to the Pennsylvania track to round out his adventure.

The first event of the six night marathon got off to a rough start for the Haldex/Pro-Ft Health Club/Strodes BBQ& Deli/54 Gas and Variety Sprinter when he was knocked out of contention in the closing laps of the A-Main resulting in a 15th-place finish. He had started on the front row of the 20-lap chase but contact with defending track champion Glenn Styres early in the Tuesday night special dropped him back to sixth in the running order. He recovered from that incident and was making steady progress towards a top-three finish when he spun following a hit from behind as the caution flag came out from another competitor on lap 18.

Back at Ohsweken Speedway on July 3rd he made a late race run to the podium with a third place finish in the Southern Ontario Sprints schedule after starting 7th.

Mitch had competed at South Buxton Raceway on a handful of occasions since joining the Sprint Car ranks with both the Patriots and SOS series but had never taken home the winner’s trophy.

On Saturday night, July 4th he finally got the monkey off his back by leading all 25-laps around the Chatham-Kent track for his third feature win of the season and second on the 2015 SOS tour.

Sunday’s wrap-up event at Eriez Speedway in Pennsylvania featured a pass on the white flag to gain second place but fell short in catching leader Justin Barger of Montrose, NY in the 25-lap Patriot Sprint Tour chase. He also had to contend with Jared Zimbardi of Bradford, PA who was trying to wrestle the lead from the top two runners in the final laps of the nail biter. In the end it was Barger, Brown and Zimbardi leading the pack of 24 starters.

Heading to this Friday’s events at the 3/8th-mile oval Ohsweken Speedway, Mitch leads the Southern Ontario Sprint standings by 63 points ahead of 2014 series champion Glenn Styres and is second in a tight three-way battle with Cheektowaga, NY’s Todd Hoddick and 2014 Champion Glenn Styres in Ohsweken Speedway’s Corr/Pak Merchandising standings heading.