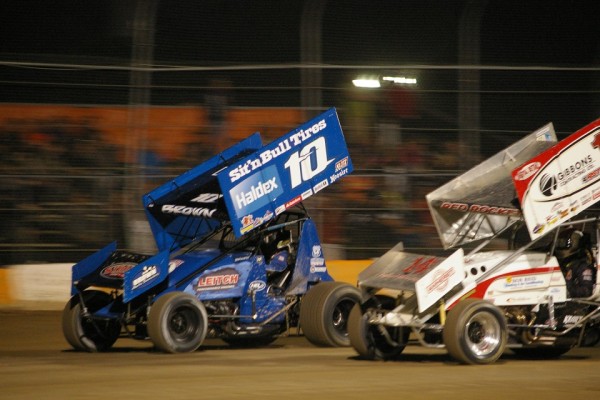 The Brantford driver, who finished second to Styres in the 2014 SOS Championship standings, now has a record of 2 wins, a runner-up finish and 4 third place finishes in the top 3 to lead the series standings after seven events in the 12-race schedule.

Glenn Styres who started on the pole won Saturday’s 25-lap chase at Brighton for his second SOS series win of 2015 and remains in second place in the points race as the teams prepare for their next encounter back at Brighton Speedway on August 8th.

The two front runners both ran the high groove around the 3/8th-mile oval as they worked the lap traffic with Styres finally taking the lead with just four laps remaining in the 20-lap A-Main.

Huppunen held on for third with Dain Naida of Tecumseh, MI and Todd Hoddick of Cheektowaga, NY rounding out the top-five

With his second-place finish Brown closed to within 12 points of current Ohsweken Speedway points’ leader Hoddick in the Corr/Pak Merchandising divisional standings with defending champion Styres in third place just 22 points out of first.

Jake Brown charged to an impressive third place finish in the Strickland’s GMC Crate Sprint Car feature on Friday at Ohsweken after starting seventh in the 15-lap race. He also finished second in his earlier qualifier.

Jake now sits third in the divisional standings 22 points behind leader Dylan Westbrook of Scotland ON and just 1 point behind Alex Hill of Ohsweken ON.