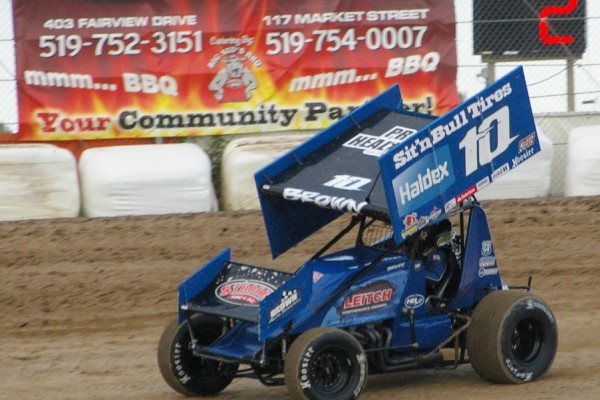 Mitch Brown edged to within 2 points of Sprint Car leader Todd Hoddick of Cheektowaga, NY on Friday night with a solid second place finish in the track’s feature event. But the Brantford competitors has company for second place in the standings in the presence of Ohsweken’s Glenn Styres who recorded his fifth consecutive A-Main win at the track in his own front yard.

Brown drew the pole position for the 20-lap chase around the 3/8th-mile oval and broke quickly into a commanding lead over outside front row starter Dain Naida of Tecumseh, MI leading laps 1 through 6 until a caution came out for Mike Ferrell’s disabled car.

On the restart Brown held the lead with Naida in second and Styres. Naida used the outside line to take the lead on lap 10 with Styres (who had moved up from his sixth-place starting spot) moving past Brown for second.

Naida’s night came to an abrupt end one lap later when he made contact with a lapped car and crashed heavily into the outside catch fence exiting turn two.

Brown moved to second place following the accident but once again couldn’t chase down Styres despite closing the gap in the closing laps.

Hoddick held on to his slim points lead but must now contend with both Styres and Brown as they head into Monday night’s special Summer Nationals at Ohsweken.

That event is expected to draw several American competitors and top runners from Quebec who are expected to run Monday’s 360 Sprint Car show as a tune-up for Tuesday’s Annual World of Outlaws Sprint Car Series event.

He is now sandwiched between Dylan Westbrook of Scotland and defending series champion Ryan Hunsinger of Toronto as the teams prepare for their event this Monday night.