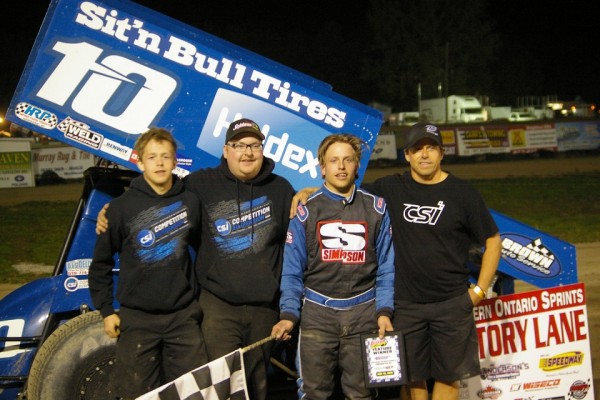 Brantford Competitor Off To Impressive Start In Sprint Car Racing

Mitch Brown got his local racing season off to an impressive start this past Victoria Holiday weekend with a win and two third place finishes at three different tracks around the Province.

The veteran competitor began his weekend schedule at Ohsweken Speedway on Friday night with a win in his Sprint Car qualifier then chased Parker Price-Miller of Kokomo, Indiana and Keith Dempster of Alton, ON to the checkered flag in the 20-lap Corr/Pak Merchandising 360 Sprint Car A-Main.

On Saturday night the MBR Team headed to Brighton Speedway where Mitch had won three straight features in 2014 and added win number 4 to his Brighton collection with a very determined run and a little luck in leading the 20-car starting field to victory in the 25-lap Southern Ontario Sprints feature event.

Last year’s SOS Champion Glenn Styres of Ohsweken quickly took the lead from his outside pole starting spot over pole sitter Paul Pekkonen of Brockville, ON, while Mitch Brown jumped from his sixth start position to third on the opening lap. Once he passed Pekkonen, Brown set his sights on Styres and the two staged a torrid battle for the win that ended when Styres got caught up in a minor mishap involving two lapped cars on lap 21. Brown managed to drive around the scene and claimed the lead.

A pair or late race restarts proved no challenge for the Brantford, Ontario native as he powered his way to his first win of the season and fourth win in the past seven races at Brighton Speedway. 16 year old Price-Miller was second while Charlie Sandercock of Carrying Place, ON finished third.

On Sunday night at New Humberstone Speedway near Port Colbourne, ON Mitch was back in the spotlight winning his heat then finishing third in the A-Main after once again outdueling Glenn Styres who went high on the track late in the race opening the door for Brown. Brown has started 7th in the 25-lap event but couldn’t reel on the leaders who had started ahead of him.

Parker Price-Miller of Kokomo, IN outdistance Dain Naida of Tecumseh, MI for the win with Jim Huppunen of Welland, ON and Keith Dempster rounding out the top-5.