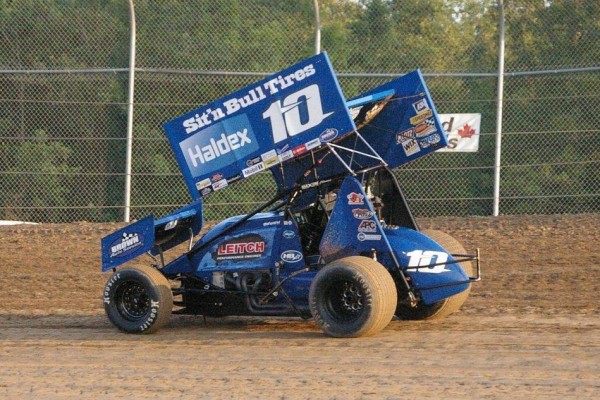 More Events To Come Before Closing Out His Rewarding 2014 Schedule

Mitch Brown completed his most successful season of Sprint Car Racing on the local racing scene with second-place finishes in both the Corr/Pak Merchandising 360 Division at Ohsweken and on the Southern Ontario Sprints circuit points’ standings. In the course of those two series he chalked up a season high five A-Main Feature victories and a host of wins in qualifying heats.

For most competitors in the winged, open-wheel sport of Sprint Car racing, that can be considered a pretty good season.

But despite the end of the local Sprint Car Racing scene here in Southern Ontario which came to a close on September 13th with the running of the Canadian Sprint Car Nationals at Ohsweken Speedway, the Brantford competitors still has some events left on his personal competition calendar before his season is complete.

On Friday, October 10th the local competitor ventured down to Waynesfield Raceway Park, south on Lima, OH for the 2nd Annual Harvest of Sprints event and ran to a third-place finish in the 25-lap A-Main.

He was the lone Canadian in the field of 25 cars that started the 25-lap feature, having qualified fourth in his qualifying heat.

The following night he was back in action at the historic Eldora Speedway at Rossburg, OH were he again competed against some of the best 360 Sprint Car drivers from the mid-west and ran to a 5th-place finish in his qualifier and seventh in the 25-lap A-Main.

“That’s it for this season”, the local youngster stated as he readied for his three-week racing expedition stateside.

For the 21 year-old speedster, these extra events are all in his curriculum for gaining greater experience in his chosen sport that is rapidly becoming a full-time career now that he’s put his future hockey aspirations on hold – a least for the time being.