MITCH BROWN SCORES THIRD IN A ROW AT BRIGHTON 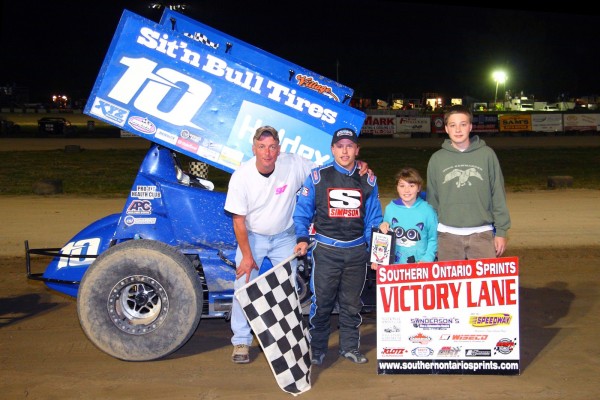 Bittersweet Win After Problems at Ohsweken

Mitch Brown scored his third straight A-Main Feature win at Brighton Speedway on Saturday night in Southern Ontario Sprints action out duelling Glenn Styres of Ohsweken in the 25-lap chase around the 1/3rd-mile clay oval in the Belleville/Quinte area in Southern Ontario.

Brown started on the pole for the main event and bolted to the lead quickly over front row co-starter Paul Pekkenonen of Brockville with Styres charging up quickly from his second row starting spot to challenge the Brantford competitor for the lead.

Despite a group of restarts before the halfway point, punctuated by a red flag at lap 13 when Shawn Sliter rolled on his side in turn four, the duo broke away from the field over the final 12 laps often running nose to tail and side by side in a frantic battle for the win.

The final 12 laps ran were run without incident as Brown and Styres with Brown’s stretching his lead to nearly 15 car lengths before the top pair hit lapped traffic. It looked as though Styres would get his chance to make a move for the lead when a pair of lapped cars broke Brown’s momentum.

However, the Brantford, ON native held off the hard-charging Styres for the victory.

Brown, Kyle Fraser of White Lake, ON and Chris Jones of Picton, ON won the qualifying heats.

Mitch Brown was embroiled in the chase to the checkered flag in Ohsweken Speedway’s A-Main on Friday night when the nose cone on his Sprint Car was broken during the running of the 20-lap A-Main.

The shattered parts brought out the caution flag forcing him to restart at the back of the 20-car field. Despite a desperate charge to get back into contention when racing resumed  he could only manage to work his way back to thirteenth spot in the finishing order -his worst finish of the 2014 season.

Jake Brown also had a bad night nearly flipping his racer when a rear tire blew in the apex of turns one and two just after Josh Shantz’s right front tire flew off in turn 4.

Brown’s crew had him back on the track for the restart where he managed to bring his #1-10 Crate Engine Sprinter back to a respectable fifth-place finish.

Both brothers won their qualifying heats at the 3/8th-mile oval.