EMOTIONAL NIGHT OF RACING FOR BROWN FAMILY AT OHSWEKEN 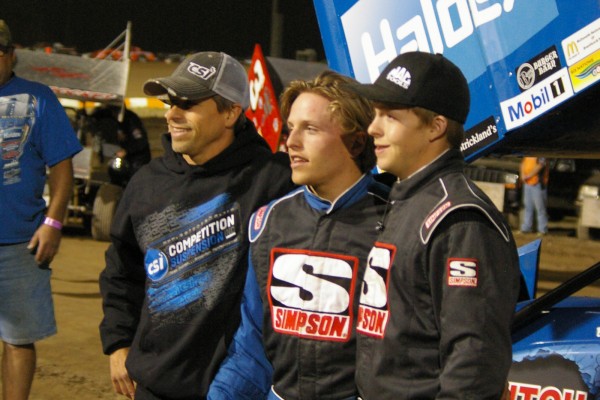 Mitch Brown was flowing with emotions as he headed to Ohsweken Speedway Friday night.

He was heading to the track for the first time since the death of his grandfather Harold Brown last Sunday (July 13th) and subsequent funeral on Thursday and he wasn’t sure how well things would go with all that had transpired during the week leading up to Friday night’s events.

In what can only be described as a storybook finish following his third-place qualifying run in the first Sprint Car heat of the night, Mitch Brown belted himself back into his Sprint Car for the A-Main with only one real thought in mind … win one for HB.

And win he did in perhaps his finest and most determined run of the season running down pole sitter Shane Ross of Thedford with two laps remaining in the 20-lap chase to claim his first feature victory of the season at Ohsweken.

During the running of Friday night’s feature, the driver of the Haldex/Pro-Fit Health Club/Sit ‘N Bull Tires/Leitch Performance Engines/Strodes BBQ & Deli moved into 2nd spot by the end of lap one and set out in pursuit of front row starter Ross in what quickly developed into a race-long fight for the win. Ross opened what appeared to be a healthy lead over Brown in the early laps , with Keith Dempster holding down 3rd place.

After te half-way point Jim Huppunen and Paige Polyak moved past Dempster and began a spirited battle for the 3rd place, while Brown began cutting into the lead Ross had built. Brown was within a car length of Ross several times in traffic before a yellow flag came out when Todd Hoddick’s right rear tire exploded on lap 15.

Ross restarted with the lapped car of Adam West between himself and Mitch Brown, but Brown was quickly able to get by West and go after Ross. A move to the middle groove paid off for Brown, as he was able to get around Ross exiting turn 2 on lap 18 and go on to an emotional win Ross settled for the runner-up spot, followed by Huppunen, Polyak, and Jeremy Hughes with a career-best 5th place.

Brown’s win moved him back into second place in Ohsweken Speedway’s Corr/Pak Sprint Car standings , 26 points behind leader Glenn Styres and one ahead of 2013 Champion Jim Huppunen.

Prior to the start of Friday’s A-Main, Mitch and his brother Jake who runs a 602 Crate Engine Sprint Car paced the field in a special lap of recognition of Harold Brown the patriarch of the Brown Racing family

Following his win, Mitch quietly tweeted Thanks for the ride! Love ya HB!

BROWN FOUTH AT BROCKVILLE
Mitch Brown was in action again on Saturday night where he finished 4th in a special Patriot Sprint Tour A-Main race at Brockville Ontario Speedway.

He currently sits third in points in the tour’s Canadian division of the US-based series.

The Brown brothers will be back in action this coming Friday night at Ohsweken Speedway with racing scheduled to get underway at 7:30 PM.