MITCH BROWN ENJOYS SATIFYING WEEKEND ON BOTH SIDES OF THE BORDER 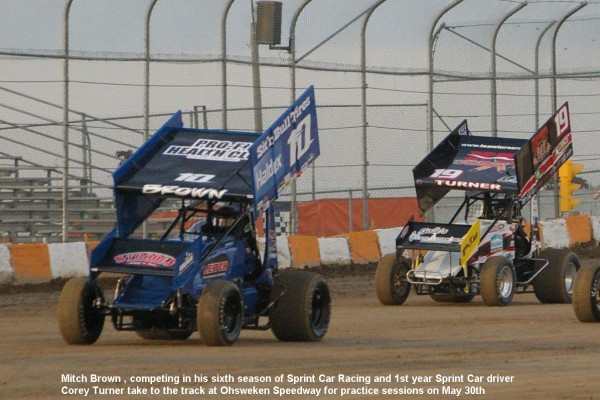 Mitch Brown enjoyed another successful weekend on the Sprint Car Racing circuit to end the month of May by running to a solid fourth-place finish at Ohsweken Speedway on Friday May 30th then traveling to Mercer Raceway Park in Pennsylvania for a Patriot Sprint Tour event on Saturday where he earned a podium  third-place run in the 25-lap A-Main.

On Friday night the pilot of the Haldex/Sit’ N Bull Tires/Pro-Fit Health Club Maxim Sprinter took the green flag in fourth spot and quickly moved into third in pursuit of the front row starters Chris Steele of St. Catharines and Mikey Kruchka of Hamilton.

Brown used the same low line Steele and Kruchka were using in the 20-lap chase but Todd Hoddick of Cheektowaga, NY was charging hard around the higher outer line and had moved into fourth-place when Jessica Zemken of Sprakers, NY experienced problems bringing out the caution on lap 16.

On the restart, Steele opened a lead again, but Hoddick was the driver to watch as he was up to 2nd with two laps to go. Nobody would catch Steele as he claimed the third 360 Sprint Car feature win of his career, while Kruchka fought back and beat Hoddick to the line by inches. Brown finished fourth ahead of Glenn Styres.

Tyler Hendricks and Robbie General made up the front row of the Crate Sprint Car feature but it was Kyle Durnin taking the lead from General on lap 3. Durnin opened a lead, while Aaron Turkey took over the second spot but Jake Brown who started 10th was on the move early by getting into the top 5 by lap 4. The younger Brown took third from General on lap 8, while Turkey began to reel Durnin despite a bent front wing.

Paul Lang brought out a caution flag when he spun on lap 11, and erased what was left of Durnin’s lead. Durnin was strong when the race restarted though, and stayed up front for the last 4 laps. Turkey crossed the line second, while Tyler Hendricks stole the third spot from Brown on the last lap, and General rounded out the top 5. Turkey’s apparent runner-up finish turned into a win when Durnin’s car was found to be slightly underweight in post-race technical inspection, a ruling that moved Jake Brown into third place and Ryan Hunsinger to fifth. 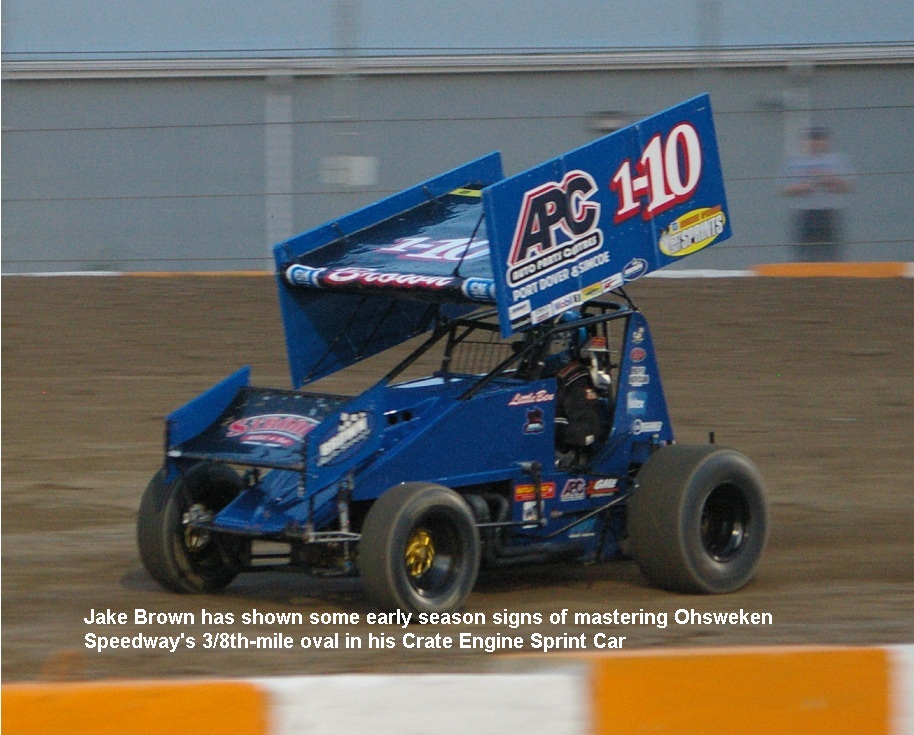 Saturday Night at Pennsylvania’s Mercer Raceway Park, Mitch Brown spun his tires coming to the green flag in the Patriot Sprint Tour A-Main allowing the top line of outside polesitter Steve Collins of Belfast, NY and Jared Zimbardi of Bradford, PA to take command of the top two spots.

Zimbardi, the reigning PST Champion inherited the lead on lap 17 after race-long leader Collins clipped an infield tire and spun around. Zimbardi then had to work hard to hold off Paige Polyak in the closing laps to snag the checkered flag.

After Mitch Brown’s bobble coming to the initial green flag, the Canadian was able to settle in and run to a smooth third place finish