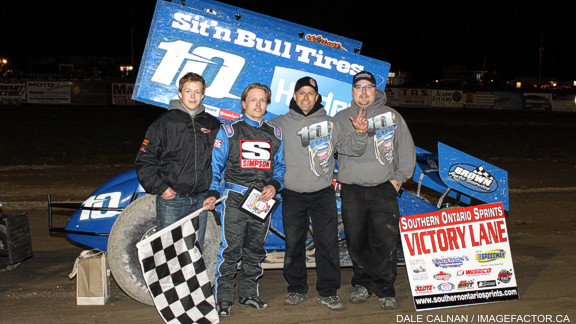 Mitch Brown was hoping to start the season on a high note and he did it in fine fashion on Saturday night (May 17th) at Brighton Speedway,

After Ohsweken Speedway’s season opener on Friday was cancelled due to wet grounds, the fifth-year Sprint Car competitor headed east down the 401 to Brighton Speedway where he had enjoyed some impressive runs in the 2013 Southern Ontario Sprints series. But he had never won at the 1/3rd-mile oval, that is until Saturday night.

The Brantford, Ontario native started on the pole of the 25 lap main event and picked up his first career Southern Ontario Sprints feature victory.

Brown led every lap of the affair, however lapped traffic would make life difficult for the lead group. Rick Wilson started third and gave chase throughout the race, but was never able to catch the #10B.

A caution on lap 19 for a spin by rookie driver Cory Turner set up a six lap shootout for the win. Brown got a good jump on the restart and distanced himself from Wilson in the closing laps and cruised to the win.

When interviewed following the race, the low-keyed youngster smiled and replied “Life is good right now” an obvious reflection of events two weeks earlier after he helped lead the Pro Fit Corvairs to the OHA GOJHL Jr. B Hockey Sutherland Cup.

Mitch had little time to relish the victory as he headed Sunday to another SOS event at Port Colborne’s Humberstone Speedway.

A poor draw in the format for determining positions for the qualifying heats and a subsequent broken rocker arm inhibited his results in Sunday’s A-main resulting in thirteenth-place finish.

Mitch ad his Brother Jake will be among the competitors on hand for Ohsweken Speedway’s delayed season opener this Friday (May 23rd) with the spectator gates opening at 6;00 PM and racing getting underway at 7:30 PM