OH SO CLOSE FOR BROWN AT OHSWEKEN SPEEDWAY 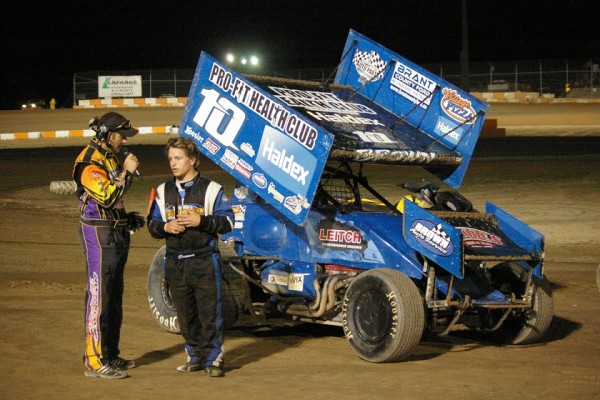 The driver of the Haldex/Pro-Fit Health Club/Strodes BBQ & Deli/Leitch Performance Engines #10 Sprinter started third in the regular season final and wrestled with second place starter Kyle Patrick of Tilbury, ON through the first half dozen laps before edging into second place in pursuit of pole sitter, Dain Naida of Tecumseh, MI.

Brown caught and passed Naida on lap 11 and appeared headed for his second feature win of the season.

But Wayne Johnson of Knoxville, IA who had taken over second place from Naida on lap 14 by running the higher, less travelled outer rim around the 3/8th-mile oval began gaining ground on the young leader who was beginning to run into traffic as he moved to a lower line encountering several slower cars. On lap 22Johnson ran down Brown and made the winning move cruising to his first feature win of the season. Brown settled for the runner-up spot, followed by Naida, Kyle Patrick and Shane Ross of Thedford, ON.

The finish also marked the end of a two disappointing finishes in an otherwise successful season.

On August 16th the usually consistent driver experienced the agony of defeat when his car’s engine blew during the Sprint Car A- Main resulting with his first DNF of the season. And the following week he had to wrestle his car through two 20-lap features when the power steering unit failed resulting in finishes of 7th and 13th-places.

The teenager held a 14 point margin over the 11th-place Karl Sault of Dundas heading into the event but Sault’s second place finish vaulted him to 9th-place dropping Jake to 11th just sixth points shy of his tenth-place standing in 2012.

As team captain he knows where his leadership allegiance lies, but one can’t help but wonder what might happen if Saturday’s game ends before final qualifying for the main event at Ohsweken is completed. The track is a mere 15 minutes from the Caledonia arena.