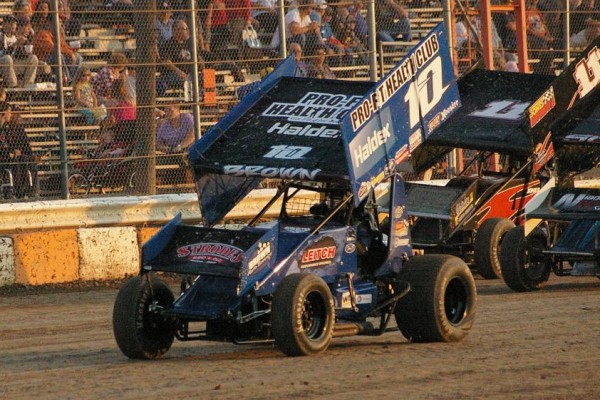 Mitch Brown put together another solid weekend of racing on the Sprint Car circuit with a solid fourth-place finish in the Corr/Pak Packaging A-Main at Ohsweken Speedway on Friday night then posted another top-five in the Saturday night run in the Southern Ontario Sprint series feature at Brighton Speedway.

But even in doing so in both events, he can’t seem to gain any ground on the points’ leaders.

On Friday night the youngster set fast time in the pre-race practice sessions and scooted to an easy win in his qualifier. He even drew the third starting spot for the A-Main but was stymied in his efforts to chase down the early leaders when he got off to a slow start in the 20-lap chase.

Pole sitter Shane Ross of Thedford, ON and Mikey Kruchka of Hamilton, ON drew the front row positions in front of Brown and Jamie Collard with Kruchka grabbing the early lead. In the early going Mitch had issues through the turns and dropped back a number of spots before picking up the pace.

Following two cautions, the driver of #10 Haldex/Pro-Fit Health Club/Strodes BBQ & Deli started picking up the chase and had moved into what appeared to be a podium finish when Collard out-dueled Kruchka for the lead.

But a fast charging Jim Huppunen using the fast outer rim of the track passed both Brown and Kruchka with three laps remaining then caught and passed Collard in lapped traffic on the final turn to snare the victory.

With his win –the first of the season for the Fenwick, ON driver – Huppunen widened his lead atop the Sprint Car standings to 28 points ahead of Collard with Mitch Brown just 30 points back as Ohsweken enters it’s home stretch on its 2013 schedule.

At Brighton Speedway on Saturday night, Mitch finished fourth in his qualifier missing a chance for a better starting spot in the A-Main redraw and started 10th in the 19 car 20-lap main event.

But when the dust had settled following a wild multi- car wreck on lap two and two later cautions for spinouts plus a mechanical problem for Glenn Styres, Mitch was running fifth and locked in a fierce battle with Jamie Collard as the two tried desperately to chase down the leaders.

Adding to their challenges was lapped traffic and as the checkered flag was waved Chris Jones of Demorestville, ON had taken his third straight SOS A-Main followed by local favourites Tyler Rand of Picton and Charlie Sandercock of Carrying Place.

Jones’ win pushed him past Jamie Collard by three points for the points lead with Mitch Brown a few markers back of Collard.

All three competitors will be among the Southern Ontario Sprint car drivers at Ohsweken Speedway on August 16th.

Jake Brown had to wait three weeks to complete the July 9th A-Main for the Thunder Stocks but he found the wait was worth it as he posted a surprising second place finish in the rescheduled 25 lapper.

Being in the right place (in fourth place) at the right time was to his liking as he suddenly found the race leaders Cory Turner and Jack Meyers tangled in turn four on the final lap.

In the night’s regular scheduled program, Jake finished fifth in his heat and settled for an thirteenth-place posting in the A-
Ken Spencer
Marketing and Media Relations
Mitch Brown Racing